Crotch: A performance and art installation by Keith Hennessy 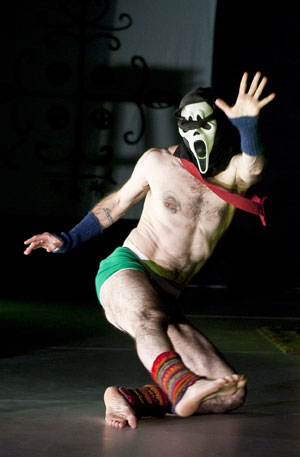 Keith Hennessy, in a performance of Crotch.

“Hennessy is brutally honest, passionate, sometimes overbearing and worth seeing for all those reasons.” – San Francisco Bay Guardian

On the surface, Crotch is about art, its histories, and its heroes. Deeper, a sadness grows, a queer melancholy, in an evocative, interpretive performance.

Moving across a stage full of sculpture, performer Keith Hennessy references the images and actions of legendary artist Joseph Beuys, embodying his shamanic beliefs and channeling this mythic figure. With music ranging from Emmylou Harris to Teddy Thompson to Nirvana, Crotch is a song, a dance, a lecture, and a conversation with the dead. True to Beuys’ legacy and Hennessy’s improvisational practice, chaos through play becomes form.

Crotch was winner of the 2009 Bessie, New York Dance and Performance Award.

Hennessy, born in Sudbury, is a dancer, choreographer and performance artist  based in San Francisco. He is regarded as a pioneer of queer and AIDS-themed expressionist dance.