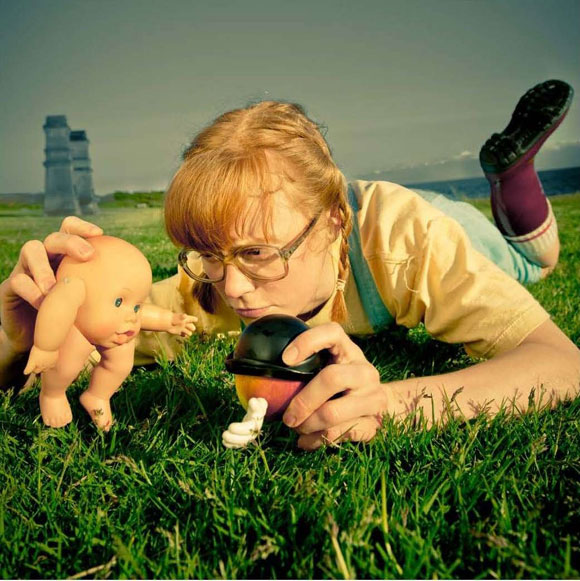 What: Little Orange Man
When: Thursday March 6 and Saturday March 8, 8 p.m.
Where: Rotary Centre for the Arts, Mary Irwin Theatre, 421 Cawston Ave., Kelowna
Tickets: Students and seniors $15, general admission $20. (Tickets available at the RCA, UBCO Bookstore, and at the door)

“It made me laugh uncontrollably, it made me cry.  If there is one show that is truly a must-see… it’s Little Orange Man. You will never see a show like this one, though you’ll be dying to.” —BloodyUnderrated

Theatre 26 and UBC’s Faculty of Creative and Critical Studies present Little Orange Man, a stage production at the Rotary Centre for the Arts, 8 p.m., Thursday, March 6, and Saturday, March 8.

Prepare yourself for Kitt the Kinder-Whisperer, a high-octane Danish girl who fires up homemade technology to extract and reenact the audience’s dreams.  What emerges through the fast-paced humour is the honest efforts of an outcast child, who entrusts a group of strangers to help fight her darkest battle. Music, shadow puppetry, edible puppetry, and dark Danish fables create this magical and touching all-audiences performance.

Little Orange Man is directed by Kathleen Greenfield, who co-created alongside performer Ingrid Hansen. The show was named the best English Language Production at the 2013 Montreal Fringe, as well as Outstanding Overall Production for the Ottawa 2012 Fringe, and Pick-of-the-Fringe in Vancouver and Victoria in 2011.

Hansen, who grew up in Kelowna, attended Raymer Elementary, KLO Middle School and Kelowna Secondary.  As a teenager, she performed at the Rotary Centre for the Arts, and then left to study theatre at the University of Victoria. Hansen arrives fresh from co-directing the Prison Puppet Project with the inmates at William Head Prison in Victoria.

Hansen and a team of theatre artists worked with 27 men at the prison to craft their own true-life stories into a full-length puppet play, which the inmates performed for five weeks in front of public audiences.