Spent takes a satirical look at the 2008 financial meltdown 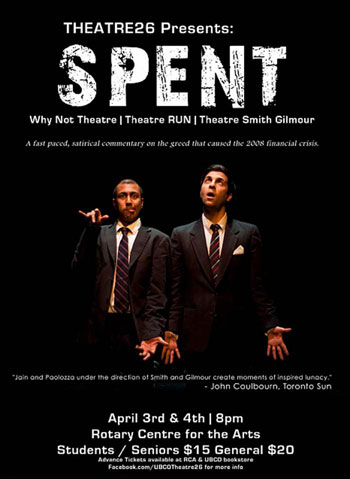 UBC’s Theatre 26 and the Faculty of Creative and Critical Studies presents Spent, a fast-paced, satirical commentary on the greed that caused the 2008 financial crisis.

Spent arrives in the Okanagan after a Dora Award-winning run in Toronto and sold-out run at the 2011 Edinburgh Fringe. Conjuring the madness of the 2008 economic downturn, the comedic duo Ravi Jain and Adam Paolozza spare no one, impersonating suicidal traders, BBC World News commentators, those who lost everything and especially the Wall Street white-collar crooks that took your money! Inspired by the techniques of silent film where humour, slapstick and pathos come together in the most imaginative way, Spent will make you think and make you laugh – all the way to the bank.

Spent is a co-production of three innovative Toronto independent theatre companies, Theatre Smith-Gilmour, Theatre RUN and Why Not Theatre.