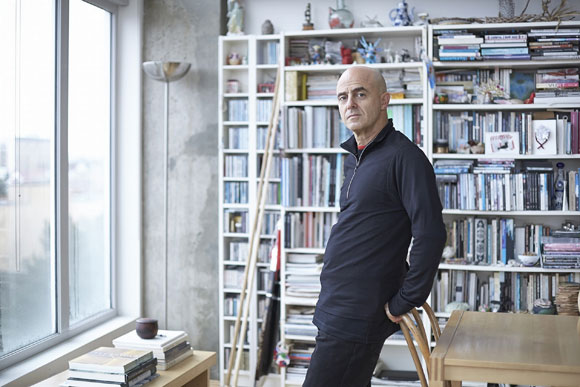 Renowned and critically acclaimed artist Jayce Salloum will visit UBC to give a special talk to the graduating visual artist class at its bachelor of fine arts (BFA) grad show.

His talk, at 8 p.m., Saturday, April 19, in the Creative and Critical Studies building, 1148 Research Rd., UBC Okanagan, is free and open to the public.

Born and raised in Kelowna, Salloum was named a 2014 Governor General’s Award winner for Visual and Media Arts.

Salloum’s projects are rooted in an intimate engagement with places and the people who inhabit them. He considers his work part art and part “social lubrication,” a counter to dominant culture, a celebration of being, involvement with the community, and political action in both harmony and conflict.

Salloum has worked in installation, photography, drawing, performance, text and video since 1978, as well as curating and conducting a vast array of cultural projects. His recent work has taken place in Afghanistan, China, Lebanon, Palestine, Israel, Aotearoa – the Māori name for New Zealand – as well as Australia, the former Yugoslavia, France, Kamloops, Cumberland House, Galapagos Islands and other places throughout the Americas.

“My practise exists within and between the personal, quotidian, local, and the trans-national,” says Salloum. “In one sense it has consistently been about mediation – the gap between the experience and the accounting, telling and receiving of it, engaging in an intimate subjectivity and discursive challenge while critically asserting itself in the perception of social manifestations and political realities.”

Salloum currently lives in Vancouver. He has exhibited at both typical and unusual venues, sometimes in disused storefronts, on the platform of a subway station, in advertising kiosks in bus shelters or amongst ruins in the woods.

A monograph on his work, Jayce Salloum: history of the present, was published in 2009 by the Kamloops Art Gallery.