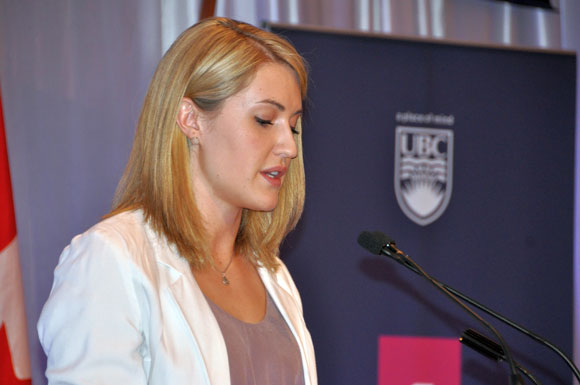 Jill Festival, a fifth-year graduating member of UBC’s Okanagan Heat women’s volleyball team, knows about success, leadership, teamwork, and failure. She experienced them all during her varsity years and told the audience at the Ninth Annual Valley First/UBC Okanagan Athletics Breakfast of her gratitude to the larger community.

Festival, an English major in the Faculty of Creative and Critical Studies, called herself “a return on your investment,” for the support she and Heat Athletics receive from financial donations, volunteer hours, and community support.

“You have all impacted our athletic program,” said Festival, who is from Calgary. “Without your support, our athletics program would simply not exist in its current form. You are all here today because you believe in the same thing: the value of competing as a varsity student athlete and the return that we will make as active members of the community once we graduate.”

Festival’s five years on the volleyball team included three as co-captain – the last three playing at the highest level of university competition in the Canadian Interuniversity Sport (CIS). She capped her playing career with the first-ever appearance by an Okanagan Heat team in the Canada West Conference finals this year.

Festival’s comments were echoed by Pierre Lafontaine, CEO of CIS and special guest speaker at the breakfast.

“The investment we make in these leaders is much bigger than athletics,” Lafontaine told the audience.

“It’s a sum of inspiration, healthy living, keeping students in school and building a world-class country.”

UBC Okanagan’s men’s and women’s volleyball and basketball teams joined CIS in September 2011, while the Heat soccer teams begin play in the premier league this fall. CIS is the governing body of university sport in Canada with more than 11,000 student-athletes and 700 coaches from 56 universities, competing for 21 national championships in 12 different sports.

Meanwhile, 5,000 Canadian students play in the National Collegiate Athletic Association (NCAA) at American schools because of a perception they have better choices for athletic scholarships. Not so, Lafontaine said. Support is growing, there is a new TV contract with Sportsnet and the organization’s goal is to demonstrate to Canadians that CIS is a viable option to U.S. schools.

Today’s student leaders are tomorrow’s leading citizens and Canada needs to ensure that these student athletes are not part of the talent drain to the U.S., Lafontaine said.

“The investment may be a bit longer – 20 years from now – but we have an amazing asset in the CIS. As soon as we sit back, we’re going to lose all the greatness we have.”

Athletic achievement is underscored by team members’ commitment to their community – in their volunteer support of charitable initiatives such as the Parkinson Superwalk, Stuff the Bus food bank campaign and Wendy’s DreamLift Day, Toope said.

“It is significant that community involvement has become part of the culture of student athletes,” Toope said. “Our student athletes are the leaders of our campus. They make the spirit of our university come alive.”

“Our Heat teams have distinguished themselves in the community, on the fields of play and in the classroom,” Buszard said, noting that a significant number of student athletes maintain an 80-per-cent average while competing.

“Congratulations on being wonderful exemplars of the true scholar athlete,” she said. 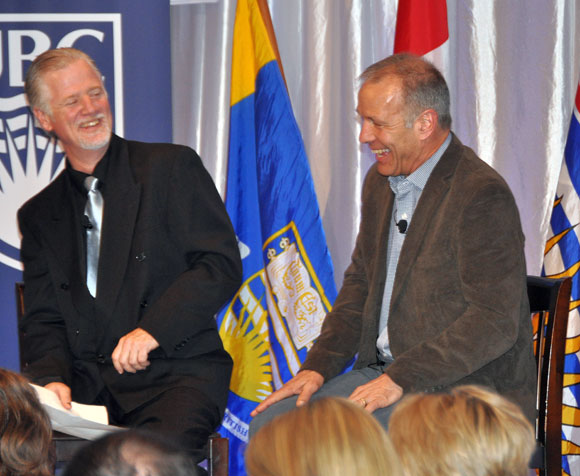