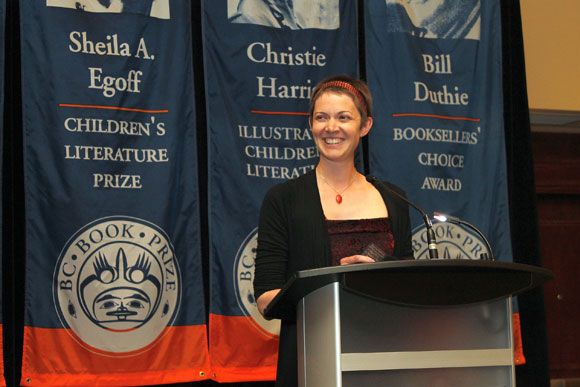 Ashley Little, a master of fine arts student with the Faculty of Creative and Critical Studies, has won two BC Book Prizes for her novels Anatomy of a Girl Gang and The New Normal.

Ashley Little, a master of fine arts student in UBC’s Faculty of Creative and Critical Studies, has won two awards in the 30th Annual BC Book Prizes. It is the first time in the history of the prestigious honours that an author has won in two separate categories with two different books.

Little also won the Sheila A. Egoff Children’s Literature Prize, awarded to the best non-illustrated book written for children, for The New Normal, (Orca Book Publishers.) The New Normal, a young adult novel about loss, centring on teenager Tamar Robinson, her younger sisters dead and her parents awash in a sea of grief.

A total of $14,000 was awarded to winners with each prize providing $2,000. This year’s BC Book Prizes Gala took place at the Renaissance Vancouver Harbourside Hotel on the weekend.

Little received a bachelor of fine arts degree in Creative Writing and Film Studies at the University of Victoria. Her first novel, PRICK: Confessions of a Tattoo Artist (Tightrope Books, 2011) was optioned for film and shortlisted for a ReLit award. She will serve as the 2014 Writer in Residence for Calgary’s Alexandra Writers Centre Society.

The BC Book Prizes were established in 1985 to celebrate the achievements of British Columbia writers and publishers. The prizes are administered and awarded by the West Coast Book Prize Society that represents all facets of the publishing and writing community.