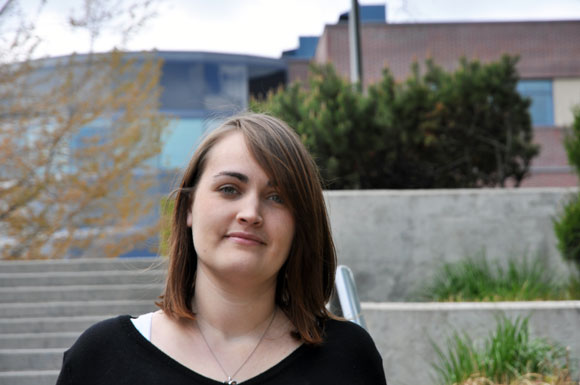 Master’s student Amanda Jones recently completed a study about available housing for single mothers in Kelowna. She says the facts speak for themselves and there simply isn’t enough support, or enough accommodation, for single parents in this region.

Jones, raised by a single parent, recently finished her research thesis, under the supervision of UBC Assoc. Prof. Carlos Teixeria, on the lack of affordable housing for single mothers in Kelowna.

“The first step in solving any problem is having the research information to say there is a problem,” says Jones, working towards her master’s degree in Interdisciplinary Studies with a focus on human geography at the Irving K. Barber School of Arts and Sciences at UBC’s Okanagan campus. “My thesis demonstrates that affordable housing for single mothers is a concern in Kelowna and I’m hoping the city will be able to address the issues that put single mothers in the position where they can’t afford housing.”

She says far too many generations of children live in poor conditions. Kelowna is seen as a destination location and prime retirement community. The result is that the city’s rental market is not geared to single, low-income families.

“High demand for housing in the city of Kelowna, coupled with a high concentration of low-paying service jobs, contributes to a situation where the wages of many residents are inadequate to afford the cost of housing,” says Jones. “In addition, rental housing starts are not meeting the needs of Kelowna’s growing population, particularly those with lower incomes.”

Jones’s study has several recommendations that may ease the problem, including more subsidized housing, a central organization that helps connect single family renters, and ideas such as a housing registry, and co-op homes where single mothers share a housing complex.

“A housing registry is something that is fairly easy for the city of Kelowna to take on,” says Jones. “Instead of us saying, ‘we need more money’, we’re saying here are some solutions and the registry may be the first step to help remove some of the barriers single mothers face.”

Jones will present her research Thursday, May 8, at the Central Okanagan Women’s Resource and Education Foundation. Sharing Ideas/Creating Action runs from 8:30 a.m. to 12:30 p.m. at the Okanagan Regional Library, 1380 Ellis St., Kelowna. She hopes to address Kelowna City Council with her research findings as well.

“Our society needs to address the social and financial barriers that make people struggle in the first place,” she says.