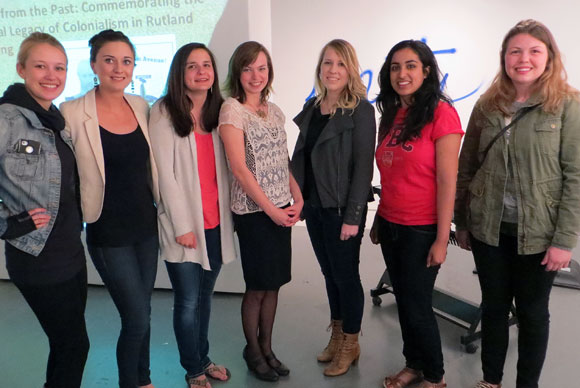 The pieces in the collection use a variety of approaches, including experimental non-fiction and poetry, a graphic essay, postcards, and an academic essay. All are aimed at provoking discussion about how public histories are represented, whose voices and experiences are privileged, and how heritage projects produce both belonging and exclusion.

The projects were developed in a third-year Cultural Studies and English course that examines the history of colonialism as a cultural project.

Students were asked to analyze the degree to which heritage commemorations in Kelowna, or their home communities, reflect the ‘settlement myth,’ says Critical Studies Dept. Associate Professor David Jefferess.

“The settlement myth refers to the story people in settler colonial societies, like Canada, tend to tell,” says Jefferess. “For instance, in this narrative, ‘history’ begins when the first European settlers arrived, Indigenous histories and knowledge are ignored or relegated to the past, and heritage commemorations become ways to show how a ‘wilderness’ was transformed into ‘civilization.’ ”

As a number of the contributions illuminate, remembering Kelowna’s past requires forgetting the violence of colonialism, says Jefferess.

The collection includes engagements with:

“This project highlights the importance of being aware of unintended bias in our presentations. This project reinforces our strategy of consulting the communities whose materials we are interpreting,” says Digby.

The Canadian museums community, as a whole, is concerned with considering many points of view in how the story of Canada’s history is told, says Digby. There is much dialogue amongst museum professionals about including voices that may not have been represented in museum presentations from an earlier era and fostering deeper and wider awareness of the land.

The result is that unintended biases can slip into exhibits. Museums present material culture, and draw heavily on objects, images, and records from their collection for display, says Digby.

“Museum collections are based on the messy, unplanned process of what is created, what survives the ravages of time, and what is donated to a museum.  As a result, we don’t always have materials that are representative of a wide range of cultures,” says Digby.

The project was presented as part of the 2013-2014 Alterknowledge Discussion Series. The series saw more than 300 people participate in the nine discussions, and will return in September with another series of discussions focused on issues of decolonization.

A copy of the collection can be found on the Cultural Studies webpage highlighting student work:
www.ubc.ca/okanagan/fccs/programs/undergraduate/culturalstudies/who-students/projects