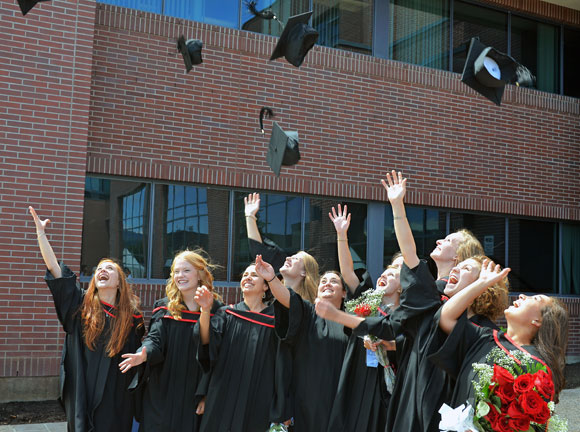 In time-honoured tradition, UBC School of Nursing graduates toss their mortarboards in the air at 2013 Convocation.

UBC’s Okanagan campus will be buzzing with excitement and activity as Convocation ceremonies take over the campus for two days this week.

Nearly 1,600 students will graduate in six ceremonies to confer degrees. It is the largest-ever graduating class at this campus.

Convocation starts Thursday, with four ceremonies, and wraps up Friday with two ceremonies. During the six Convocation events, UBC will confer 21 doctoral degrees, 162 master’s degrees, and 1,402 undergraduate degrees. Including those completed last fall, a total of 1,585 degrees will be conferred this week.

In 2013, 1,452 students graduated from UBC’s Okanagan campus and in 2012, 1,306 students received degrees. The number of degrees has almost tripled since 2006, when 468 degrees were conferred at the first UBC graduation ceremony in the Okanagan.

Deputy Vice-Chancellor and Principal of the Okanagan campus Deborah Buszard says crossing the stage is the first step to becoming a fully-fledged UBC alumnus.

“Their education at UBC will take our students places they never imagined,” Buszard says. “I encourage them all to remain engaged in the life of the university as an alumna or alumnus – upon crossing the Convocation stage they will join a global network of over 300,000 UBC alumni and a growing community of Okanagan campus graduates.”

UBC also presents a number of special awards during Convocation including an honorary degree that will be presented to 2009 Nobel Laureate Jack Szostak. Internationally recognized for his work in the field of biochemistry, Szostak’s research has led to discoveries that have changed the basic understanding of the process of aging, and the biology of cancer at the cellular level.

Szostak’s honorary Doctor of Science degree will be conferred during the 8:30 a.m. ceremony on Friday, June 6.

A number of teaching and student excellence awards will also be presented during Convocation including the President’s Service Award for Excellence. It is awarded each June to a UBC employee who is nominated by their peers for going above and beyond their general duties to improve the student experience. Erin Shannon, manager of Academic Support Services at UBC, is this year’s winner and was nominated for helping to establish the Tuum Est Student Initiative Fund.

Details to view live webcasts of UBC’s Okanagan Convocation ceremonies can be found at: graduation.ok.ubc.ca/event/live-webcast 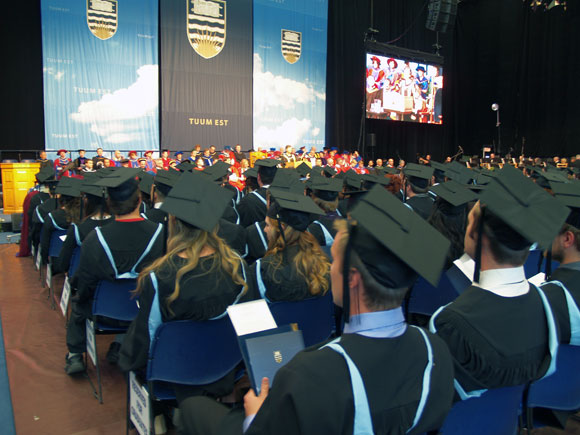 Graduates at the 2013 UBC Convocation ceremony.