UBC Okanagan’s first two Aboriginal PhD graduates are taking what they have learned back to their Okanagan communities. The Syilx (Okanagan) traditional territories extend from BC’s south central interior to north-central Washington. UBC’s Okanagan campus is located within this territory. Nsyilxcn (Okanagan language) is spoken in the Syilx First Nation territory commonly known as the Okanagan territory.

Michele Johnson’s interest in revitalizing the Nsyilxcn language led her through a transformative journey that included learning Nsyilxcn while teaching it to others. An Indigenous language activist, Johnson is currently pursuing post-doctorate research in Indigenous language revitalization through Simon Fraser University, teaching new cohorts of learners, and teaching a summer course at the University of Victoria. 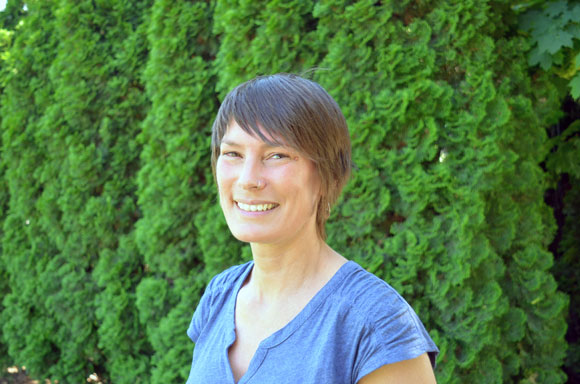 Michele Johnson arrived in 2008 planning to study ethno-botany and its embedded relationship to Syilx culture and narrative. Yet while taking a course on the Nsyilxcn language, she discovered the language was critically endangered with only 50 speakers remaining.

Johnson was sensitive to her Syilx roots as a child, but did not speak Nsyilxcn growing up. She became acutely aware that Nsyilxcn is rapidly disappearing from the cultural landscape, as no children are being raised in the language in Canada.

So she decided to study the Nsyilxcn language and teaching methods as her Interdisciplinary Graduate Studies PhD project, through the Irving K. Barber School of Arts and Sciences. Her supervisor Christine Schreyer is an anthropological linguist who guided her journey. She was also guided by Sʕamtic’aʔ Sarah Peterson and Christopher Parkin, gifted teachers and creators of the Paul Creek Language Association, based in Keremeos, BC.

Johnson and four other like-minded Nsyilxcn learners set up a “language house” – living and working together, studying intensive Paul Creek lessons, threading Nsyilxcn into the fabric of their everyday lives. They invited Sʕamtic’aʔ and other Elders to their home, learning traditional story telling, breathing and living Nsyilxcn as much as they could. Now as a mid-intermediate speaker, Johnson is one of the few researchers who has documented language teaching methods that can create speakers within two years of study.

She has written songs, stories, and made videos in Nsyilxcn as part of her discovery and investigation into the richness of language. Johnson’s journey in Indigenous language revitalization took her on an applied research project to the Tlingit nation in the Yukon – where the language is entirely different – and gained a broader perspective.

As part Syilx-Okanagan, Johnson learned that all Canadians live within a colonial society. Through her research, she has examined the concept and history of colonization in Canada and now sees life through a different lens.

“Part of being an Indigenous scholar was going through this almost painful process of living decolonization on a personal level,” says Johnson.

“I think a lot of our transformative journey was learning how to decolonize ourselves, living in the middle of nowhere and learning to speak the language,” says Johnson. “You have to go to quite a length to decolonize yourself and we all need to go through our journey. We don’t know how colonized we are until we go through the process of decolonization.”

Johnson has come to realize that revitalizing and speaking Indigenous language is her chawt – a Nsyilxcn word referring to the role and responsibility of every living being.  Following Convocation, she is pursuing her goal through post-doctoral study at Simon Fraser University.

The revitalization of Indigenous languages is, in Johnson’s words, highly-politicized; there is widespread opinion within First Nations community about change, stewardship and promotion of language. But Johnson believes that making a difference starts with recruiting young speakers to preserve and revitalize cultural values through learning their language.

Johnson plans to teach new cohorts of learners through her post-doctorate research and will continue to record fluent speakers. She will be teaching language revitalization through the University of Victoria this summer. She is dedicated to support the creation of new speakers, through grass-roots efforts.

“That’s what true activism is … looking to use what you have learned,” she says.

Johnson has written and recorded a Nsyilxcn lullaby which can be viewed on YouTube: https://www.youtube.com/watch?v=EANqVFhtHS4 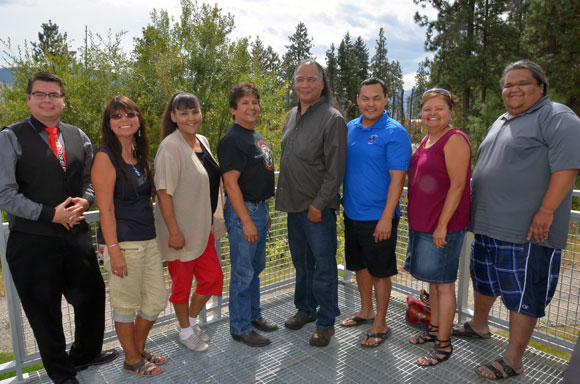 For Marlowe Sam, education is the key that unlocks many doors.

Graduating with a PhD in Interdisciplinary Studies from the Irving K. Barber School of Arts and Sciences, Sam, a member of the Wenatchi band of Northern Washington, now teaches Indigenous studies at Penticton’s En’owkin Centre, which is affiliated with UBC.

“I feel this is my calling,” says Sam. “I like teaching and having the opportunity to change people’s perspectives. Even a lot of our own people do not know Okanagan history and the impacts of colonialism.”

Many Aboriginals feel the burden of colonialism from their history with residential schools. Sam wants to shed light on the legacy of colonialism, providing historical context to both Aboriginal and non-Aboriginal students. Understanding that history helps lift the burdens of oppression, guilt and raises confidence among students that they can carve out their own futures, says Sam.

“I like to have the ability to open those doors for both Aboriginal students and non-Aboriginal students,” says Sam. “I teach different methodologies. I don’t lecture students with a certain point of view, but let them come to their own conclusions themselves. It opens up the learning channels for them – so it doesn’t end up shutting doors.”

Educating students so they learn their relationship to the rest of the world, to the land and all living creatures gives voice to what Sam calls his first calling – political activism, advocating for Aboriginal rights and ensuring there is opportunity for rising generations.

“It’s exciting to work within the system,” says Sam. He credits the University for having the foresight to help Aboriginal people gain a higher education, beyond undergraduate degrees.

“UBCO and Indigenous studies are pretty unique to our area,” says Sam.  He says informal discussions could lead to Okanagan (Syilx) courses being offered at several other post-secondary institutions in BC and the Wenatchee and Colville areas of Washington.

This in turn brings a world of possibility to Sam’s doorstep, in extending his knowledge to new generations and people on both sides of the 49th parallel.

“There’s a big interest around the content,” says Sam. “I don’t know if that’s done yet anywhere across North America, with institutions across borders cooperating like this. It will be interesting to see if it turns into anything.”

If it does, Sam plans to be part of that pioneering effort.