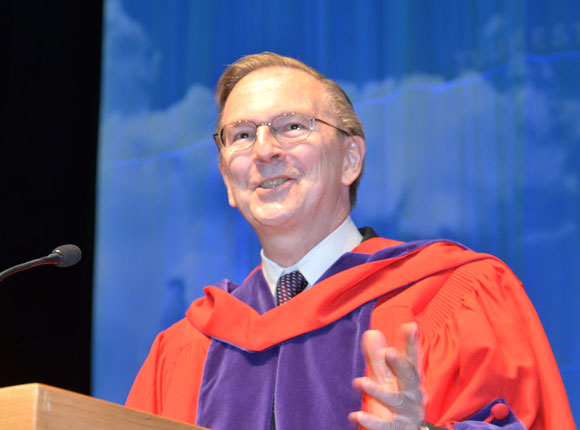 The importance of life after university is to continue asking the big questions, says Nobel Laureate and UBC Honorary Degree recipient Jack Szostak.

“If there is one lesson I hope you’ve learned it is the necessity to question the received wisdom of the time,” said Szostak. Whether they are ideas put forth by peers, professors, parents or the gatekeepers of society, university graduates need to continue along the path of questioning accepted knowledge to make new discoveries.

“You’re not going to be ready for an unpredictable future or ready to change the world unless you ask the hard questions,” Szostak said. And be ready to question yourself as well, he told graduates.

“Scrap your favourite ideas,” he said. When Szostak was researching his project that led to the Nobel Prize, he had to face the reality that his preconceived knowledge did not pass muster.

“I proved to be wrong,” he said of his preliminary work. Only when Szostak threw out his own ideas and started over, did he find success. Graduates need to challenge themselves in the same way throughout life, Szostak said.

Szostak received the 2009 Nobel Prize in Physiology or Medicine, along with research colleagues Elizabeth Blackburn and Carol Greider. He is the Alex Rich Distinguished Investigator at Massachusetts General Hospital, Professor of Genetics at Harvard Medical School, Professor of Chemistry and Chemical Biology at Harvard University, and a Howard Hughes Medical Institute Investigator. He is a graduate of McGill University and holds a PhD from Cornell University.

Szostak’s honorary doctorate was awarded at the fifth of six Convocation ceremonies over two days, as UBC conferred a total of 1,585 degrees to undergraduate, master, and doctoral students.

UBC President Stephen Toope, at his final Okanagan campus Convocation before departing for the Peter Munk School of Global Affairs at the University of Toronto later this month, told graduates their future is bright. He scoffed at reports that the Class of 2014 has a cloudy future of employment as baristas, gym attendants and taxi drivers.

“Forget all that. You are going to prove the naysayers wrong,” Toope said. Evidence shows university graduates earn higher wages, have lower unemployment and more opportunity than most members of society. University teaches students to become critical thinkers and the education they receive beyond the classroom – in the dorms, on sports teams and even in the pubs – helps shape their thinking and adds to their knowledge and confidence in life.

“Don’t be misled by false claims that you are choosing unwisely by going to university,” Toope said. “Education is about citizenship and enriching your spirit as much as it’s about jobs.”

Deborah Buszard, deputy vice-chancellor and principal of the Okanagan campus, told graduates that they now join a community of 300,000 UBC alumni who have crossed the stage before them, since the first graduating class of 1915.

“Use your skills and knowledge but also draw upon that network,” Buszard said. “The world is changing. That means your world is full of problems and challenges … in other words, it will be exciting.”

As the granddaughter of a coal miner, Buszard became a plant scientist by attending university – beyond expectations of what could be achieved.

“My family and I could not have imagined that kind of journey – and you have that kind of transformative journey ahead of you.” 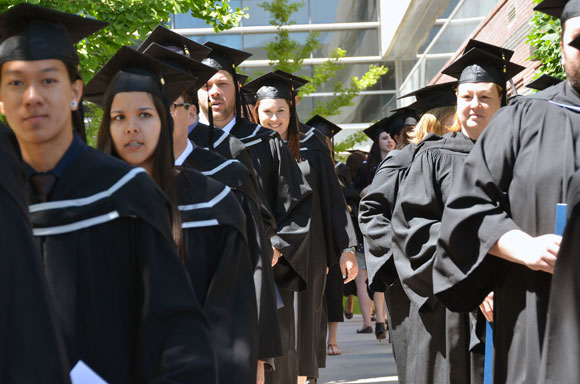