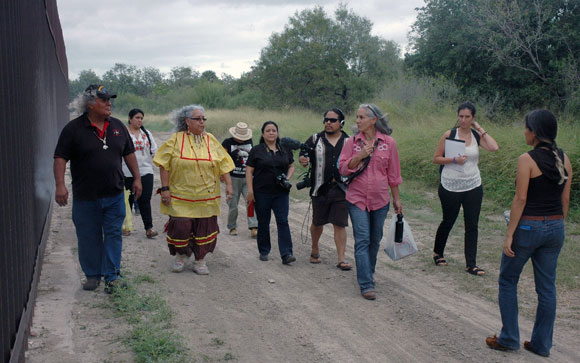 Margo Tamez, third from right, walks along the Texas-Mexico border wall near the community of El Calaboz, with Lipan Apache elders, law students of the University of Texas Law Human Rights Clinic, and documentarians. Photo by Clemente Guzman

A UBC researcher has been named an official observer by the Office of the High Commissioner for Human Rights at the United Nations Committee on the Elimination of Racial Discrimination (CERD) 85th Session in Geneva, Switzerland, next month.

Margo Tamez, an assistant professor of Indigenous studies in department of Community, Cultural and Global Studies in the Irving K. Barber School of Arts and Sciences at UBC’s Okanagan campus, will participate in the session from August 11 to 15.

Tamez, who has extensively researched Aboriginal rights in the U.S., contributed to a major brief to the Early Warning/Early Action procedure of the CERD body in 2012 which will be reviewed at the 85th session. Her research focuses on Indigenous rights claims by the Lipan Apache from Texas. The claims include lack of consultation, free prior and informed consent, mass dispossession, and non-recognition of treaty obligations.

In addition to the session on racial discrimination, Tamez will attend a session of another treaty body, the UN Convention on the Elimination of Discrimination Against Women (CEDAW).

“It is a special honour and exciting opportunity to be invited to sit in on CEDAW’s session and observe their work,” says Tamez.

“My participation in this one-day training of the CEDAW opens opportunities to analyze further the gendered dimensions of the Lipan Apache case,” says Tamez.  “My co-authors (law professor Ariel Dulitzky and the Human Rights Clinic, the University of Texas School of Law) and I developed analysis which makes visible the ways in which the border wall, militarization and dispossession are adversely affecting Lipan Apache elder women, women and girls.”