An Indigenous perspective received by students in summer programs 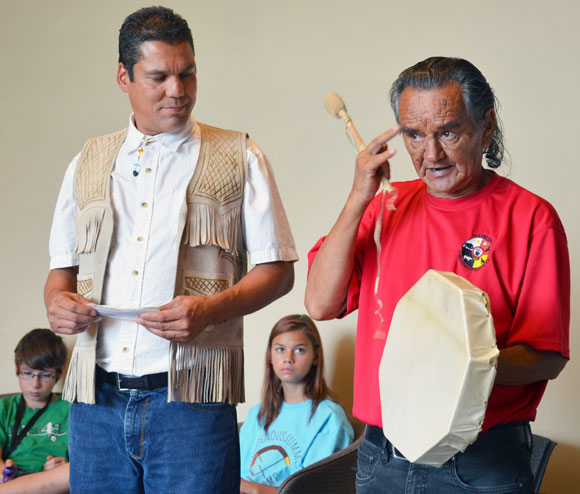 At the Indigenous Summer Scholars Camp, UBC student Alex Augier and Elder George Pierce give Aboriginal secondary students an appreciation of their environment and what it was like before settlers arrived.

This summer’s UBC Summer Scholars Program and the Indigenous Summer Scholars Camp promoted the importance of a positive relationship with Mother Earth to visiting international, domestic and Aboriginal students.

In July, respected Okanagan Indian Band Elder Eric Mitchell provided a cultural context to 34 students from around the world at the traditional Winter House of the Okanagan Indian Band. They gathered in the structure, made up of logs with a roof made of earth, near the shores of Okanagan Lake to hear insights into First Nations culture.

“One of the Hopi prophesies talks about the land being covered with snakes and how bugs were on these snakes. And out of these bugs will come poison,” said Mitchell who has provided cultural training to third year nursing students.

“At the time, the Hopi ancestors could not understand how this could be. But we now know, the snakes are the highways and roads and the bugs were the cars and trucks. The poison is the exhaust which is having an impact on Mother Earth.”

Mitchell also explained about an Okanagan Nation leader who met the famous Lewis and Clark expedition in the early 1800s.

“The chief was Pelkamulaxw the third, Chief Nkwala’s father.  He was hunting buffalo with the Blackfoot near what is now Helena, Montana. When he came back to describe a blond person to his people, he said their hair was the colour of wood shavings and it curled like that. Their clothes were like buckskin but thinner. And their eyes were the colour of the sky,” patiently explained Mitchell.

“He told of a stick that was used to bring down Canada geese. People back home didn’t believe him, but 50 years later the first muskets came to this valley.”

The stories made an impact on the international visitors.

“His story really moved me and impacted me on a level that I can’t explain,” said Stephanie Siow of Hawaii. “I’m not sure why, but the information he had to share was very profound.”

“I found the entire idea of having a cultural talk under a traditional monument very interesting,” agreed Shravani Kher from India. “It gave a good feeling of the olden days. I realize the importance of traditional values. Learning about Native (culture) made me realize how important it is to sustain your culture.”

The 2014 Summer Scholars Program, an annual event organized by the International Student Initiative, welcomes students from around the world to experience the Okanagan campus for two weeks of hands-on learning in Environmental Science and Sustainability. The program has hosted 72 students from 27 countries in the last three years.

“Respect for nature is something we need to talk about. It’s important for young people to know the culture. Everything we have comes from Mother Earth,” said Pierce whose family comes from Great Slave Lake. “Today, everything goes so fast. Don’t be afraid to slow down. When you see an animal, stop and watch the animal for a bit. Take time to appreciate what we have.”

In their camp surveys, 63 per cent of the students ranked the drumming workshop as excellent, 31 percent good and six percent were neutral on their experience. 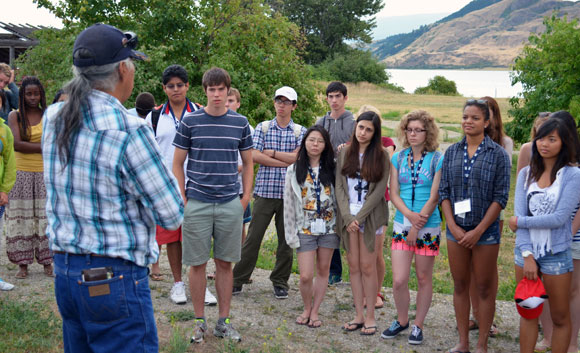 Okanagan Nation Elder Eric Mitchell provides a cultural context to the land to visiting students just outside the door of the Okanagan Indian Band Winter House. A total of 34 students from 16 countries took part in this year’s UBC Summer Scholars Program.