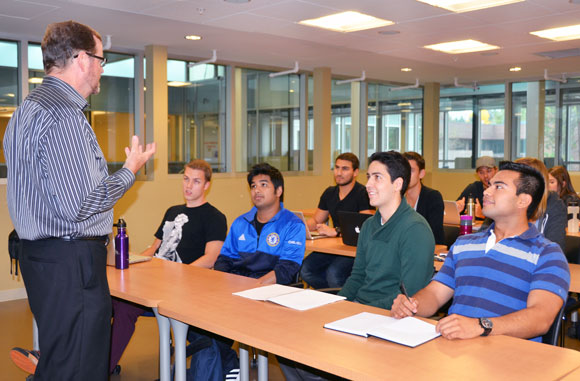 As a university student, John Burton always found a seat at the back of the lecture theatre. Shy and afraid of speaking in front of people, he liked the anonymity.

Now, as an assistant professor at UBC’s Okanagan campus, Burton knows he would have benefited from being out of that back row. Burton, who teaches business ethics, has instituted a ‘rolling seats’ initiative in his second-year management class. He assigns seats to the students and each week those in the front row move to the rear of the class, and each row of students moves forward. Every student who hides out in the back row eventually ends up in the front.

Dubbed rolling seats or the Front Row Experience (FRE), Burton says he got the idea from the Socratic circle teaching plan—a group study idea named after Socrates and used by educators around the world. But lecture halls don’t lend themselves to students working in circles.

“I decided to make the first two rows my go-to students,” he says. “They are the ones I will ask questions, the ones I expect to be most prepared for each class. That’s not to say I’m not going to engage with all students, and the ones at the back have to also be prepared because I might surprise them with a question.”

Requiring students to sit in randomly mixed groups, the FRE method discourages formation of cliques and encourages them to get to know their classmates. Burton says international students account for up to 20 per cent of management classes, and the FRE helps dissolve cultural barriers.

Burton’s idea has caught the attention of UBC’s Equity and Inclusion Office. Alden Habacon is UBC’s director of Intercultural Understanding Strategy Development and he is the first to admit that Intercultural understanding is a fairly new concept.

“Diversity of people, and inclusive and intercultural learning are part of the DNA of UBC,” says Habacon. “In fact, intellectual diversity is core to UBC’s success and aspirations in research, community engagement, and student learning.”

But it can’t just be forced onto people, he notes. While implied on campus, finding unassuming ways to break down barriers makes for a more natural transition.

“UBC is a global place, and there is the potential for the relationships and engagement across profound differences that can truly enrich our understanding of the world,” says Habacon.

Burton, whose initial goal was to give students a tool to break the ice, has been using the idea for years in his classroom.

“I didn’t introduce rolling seats into my classroom with diversity in mind, but diversity is a wonderful side benefit,” he says. “These relationships start with a face-to-face encounter. The culture on our campus provides such a great opportunity for understanding each other and it’s great that you can build those networks right here in your classroom.”