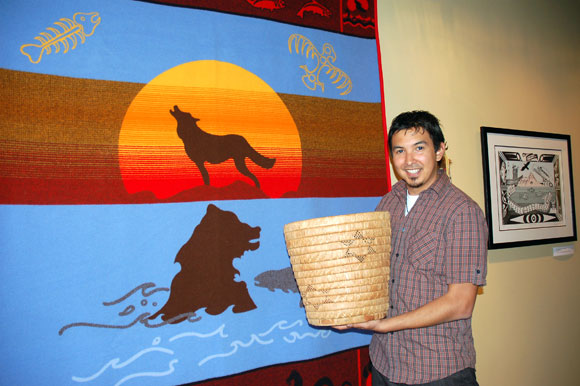 UBC graduate Jordan Coble, with Westbank First Nation art that he curates as curatorial and heritage researcher for the Sncəwips Heritage Museum.

With welcome messages in both English and Nsyilxceən, and the inlaid images and names of indigenous flora and fauna, the banners are both colourful artistic renderings and reminder of the Okanagan’s First Nations heritage. Coble, UBC graduate and curatorial and heritage researcher for the Sncəwips Heritage Museum, and Pat McCormick, an urban design planner for the City of Kelowna, will initiate a discussion on these aspects of the Bernard Avenue revitalization.

This collaboration between the city and Westbank First Nation, and how the relationship between Syilx people and people who have arrived more recently is represented in Kelowna’s public history, is the topic of the Alterknowledge discussion series forum, Friday, November 14, 7 p.m., at the Alternator Centre for Contemporary Art, 421 Cawston Ave., Kelowna.

“The Bernard Avenue revitalization presents one of the first and only examples of public art in Kelowna that recognizes and values Syilx culture,” says David Jefferess, associate professor of Cultural Studies and English at UBC Okanagan.