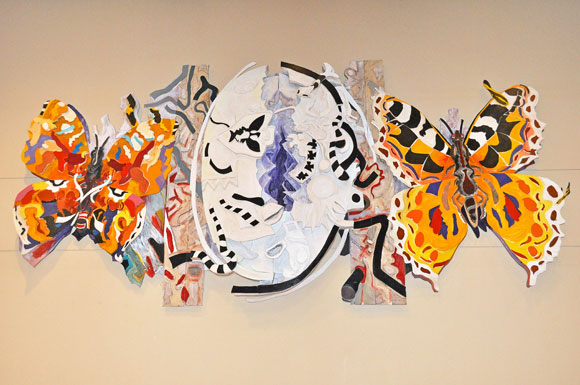 It may be winter, but two bright and colourful butterflies have made a recent and dramatic appearance at UBC’s Okanagan campus.

Susan Belton, UBC’s Public Art Collection Curator, is celebrating the installation on the Okanagan campus of a second artwork by renowned Canadian artist Jack Shadbolt. This time, two enormous, colourful butterflies flanking a central chrysalis have been installed in the Ballroom inside University Centre. Titled Primavera, the wooden construction is 9.5 feet high, 20.5 feet wide and weighs 1,100 pounds. The sculpture now covers the south wall in a room used for many special events and public functions.

“Its great size made the placement in the Ballroom a daunting prospect,” says Belton. “We required consultation with a structural engineer and the use of a brilliant installer who came up with a way to use three enormous scaffolds to winch the work into place.”

Primavera comes to UBC Okanagan as a generous art loan from Kelowna’s Tantalus Vineyards. It was initially created by Shadbolt for an installation in Vancouver’s MacMillan Bloedel Building in 1987. Shadbolt made the work in the same year as Tree of Life, now installed in the Reichwald Health Sciences Centre on the UBC Okanagan campus.

“Given the enormous size of both works, it is amazing to think of someone at the age of 78 constructing such massive pieces,” says Belton. “Together they represent the artist at the height of his career, and we are incredibly fortunate to have them both here.”

As does Tree of Life, Primavera shows Shadbolt working to create something that addresses his notion that life is an uncontrollable, exuberant force that changes and flourishes, just as a butterfly transforms and emerges from its chrysalis. Shadbolt said, “I saw the butterfly as a powerful symbol of the natural and spiritual will to survive through change and transformation.”

Belton adds, “What a perfect theme for this campus, which is in a perpetual state of metamorphosis.”

Two years ago, celebrated Canadian poet Patrick Lane received an honorary degree from UBC Okanagan. He gave an emotional and inspirational Convocation address about a blue butterfly he once found on a cold December day in Kelowna—very near the current site of UBC’s Okanagan campus. The butterfly theme, its renewal and exuberant life, is well symbolized at the university.

“We are extremely grateful to Eric Savics and Tantalus Vineyards for the loan of this important artwork,” says Belton. “Far-sighted and creative individuals like Mr. Savics enrich our campus immeasurably. Our faculty, staff, students, and alumni can now encounter a second cultural artifact of national significance in our own backyard.”

Belton also acknowledged the invaluable help of Pauline Boyle of Vancouver, who worked tirelessly to help bring the project to completion.

Jack Shadbolt (1909-1998) was a major Canadian artist with 70 solo exhibitions and important retrospectives at the Vancouver Art Gallery, the Museum of Anthropology at UBC, and the Glenbow Museum. Shadbolt represented Canada in many international exhibitions, including the prestigious Venice Biennale, the Sao Paulo Biennale, the Carnegie International at Pittsburgh, and the Brussels and Seattle World’s Fairs.

In 1969, a 30-year retrospective of his work was shown at the National Gallery of Canada and subsequently toured the country. In 1972, Shadbolt was appointed to the Order of Canada, and in 1973 he received the University of Alberta Canadian Artist’s Award. In 1990, he became a member of the Order of British Columbia. He also received honorary degrees from all three major research universities in British Columbia.

The UNC Ballroom from a wide-angle view.