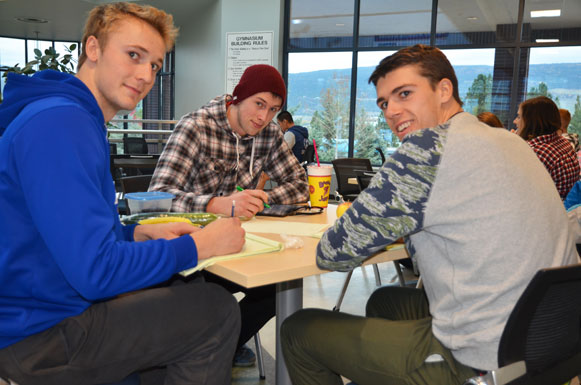 To some, volleyball is a just game. To others, it’s science in action.

Whether it’s gravity, velocity, acceleration, or angles, the science behind the widely popular game is clear. Being able to apply that science is another thing.

At UBC’s Okanagan campus, the men’s Heat volleyball team is rich with School of Engineering students—a fact not lost on the coach and close-knit team members. Of the six team starters, five are engineering students.

Third-year mechanical engineering student Jim Bell is at ease around his teammates, who are also his classmates. When not on the court, training in the gym, or in a lecture hall, they’re together eating lunch and poring over textbooks or quizzing each other on scientific theories and game schedules.

Indeed, knowing physics and angles is just as important as being able to set and serve. All of the Heat players grew up playing volleyball and were recruited by Heat scouts. While playing at the elite Canadian Interuniversity Sport (CIS) level, there is also the underlying understanding that grades come first.

“They are student athletes—in that order. And we take their academics seriously,” says Rob Johnson, director of Athletics and Recreation at UBC Okanagan. “UBC has highly competitive academic admission requirements so the students who are admitted are serious about their academic goals. The result is that our student athletes are all high-achieving people or they wouldn’t have reached this academic level or the athletic prowess to compete at the CIS level.”

As university players, the students must take at least 18 credit hours (six half-year courses) each year while they have the opportunity to spread their varsity careers over the five-year CIS eligibly period. That takes some pressure off, but the engineering workload is challenging. Combine classes and lab time with two-hour volleyball practices four days a week, specialty and personal training, along with league competition in a conference that spans from BC to Manitoba, and there are few hours left in the week to crack open those books and memorize scientific theories.

“It does get challenging,” says Schlagintweit. “Our professors are usually pretty flexible and they know the situation. They do look at our schedules when they are planning tests and exams.”

It’s not uncommon for Heat student athletes to study on planes, have quizzes invigilated by the coaches in hotel rooms, or leave the court if an exam has to be written at the same time as practice or a competition.

“We need to plan well ahead, especially for mid-terms and exams,” says Schlagintweit. “But you also need to know when it’s time to reward yourself with a break, and when it’s time to knuckle down and really hit the books.”

Flexibility in the classroom is also essential. Senior mechanical engineering instructor Ray Taheri fully supports his students who play varsity athletics. With several first- and third-year student athletes in his classes, he does his best to accommodate their playing schedules.

“These students have gone the extra mile, and despite their intensive academic schedules they have joined our athletic teams,” Taheri says. “These students are our campus representatives in various sporting events and their success, whether as an individual or as a team, is our campus success. As a result, we as faculty should assist them as much as we can in their athletic endeavours.”

Success can come in many forms. For Josh Harvey, the 6’6” team middle, while winning is the absolute goal, team friendships are a happy by-product. This Heat team is still young, with most senior players in their third year, and not a lot of wins on the court yet.

“One of the best things about the team is the mentoring,” he says. “You spend so much time together, you have to enjoy your team and get along—and we do. We help each other when we can, whether it’s with a text book, in the classroom, or on the court.”

But the team has bonded; almost every waking moment is spent together. Not only do they play, train, and study as a team, they grocery shop together because as Harvey says, they have to eat well (and they eat a lot!)—which is all part of science in action. 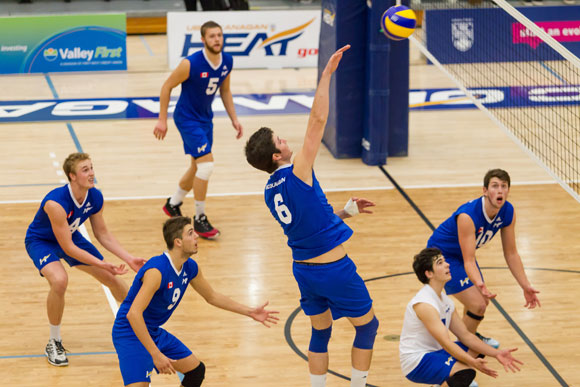 Jim Bell, left, Kristof Schlagintweit (No. 6) and Josh Harvey (No. 10) work with their teammates during a recent game at UBC Okanagan. Courtesy Greystoke Photography.