A UBC researcher says bridges built to meet current Canadian safety codes are being ‘overbuilt’ and may still suffer extensive damages after a major earthquake.

A recent study by researchers at UBC’s Okanagan campus examined a variety of bridge types along with design requirements under the Canadian Highway Bridge Design Code. The study concludes that while bridges are being built to withstand the force of an earthquake—the bridges are being overbuilt and driving up unnecessary construction expenses.

At the design stage, engineers determine a bridge’s seismic performance and predict damages—if an earthquake occurs—by calculating strains the material can withstand, explains UBC professor Shahria Alam. They must also make calculations for the probable post-earthquake functionality of the bridge. 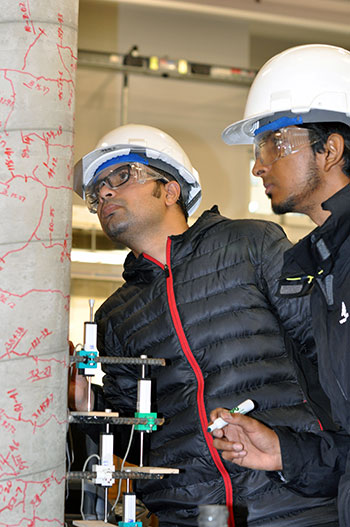 Test leader Mosharef Hossain, right, along with fellow UBC engineering student Rashedul Kabir, left, carefully inspect a concrete column after it has been put through a lengthy shake test at UBC Okanagan’s Applied Laboratory for Advanced Materials and Structures.

“We’ve determined it’s very unnecessary to design a structure with that much reinforcement,” says Alam, the study’s author. “The code calls for a lot of material and the size of the columns and beams are simply too large.”

Alam, who teaches civil engineering at UBC’s Okanagan campus, explains there are a lot of materials that go into bridges, and for years the common thought has been to add more steel reinforcement to make them stronger. However, research and structural testing in his lab and on a bridge pier in the Lower Mainland, is telling a different story.

Under Canadian Highway Bridge Design Code, load, durability and seismic design—how movement during an earthquake will be dispersed within the structure so it will remain standing—are all part of the basics when bridges are planned. Alam is suggesting the code may eventually be revised.

“Public safety is the most important aspect and we have to build structures so they do not collapse during an earthquake,” he says. “What we’re saying now is that we should be building structures that not only save lives, but we should also be saving the structure itself.”

As part of their research, Alam and his team have been testing shape memory alloy reinforced, and post-tensioned bridge piers, in the Applied Laboratory for Advanced  Materials and Structures (ALAMS) on UBC’s Okanagan campus. Alam’s team tested the seismic performance of such structural elements.

“We’ve proposed target residual drift-based criteria for performance-based seismic design of bridges that have self-centering capability,” says Alam. “It is very expensive to build a bridge to a certain standard, and then you cannot afford to demolish and replace it. Hence, new structural systems can be designed by following the proposed guideline. Thus, engineers can build bridges that will be almost damage free even after a major earthquake.”

The study related to seismic code was conducted by Alam and his student Qi Zhang in collaboration with MMM Group and was published in the Canadian Journal of Civil Engineering. The second study related to shape memory alloy reinforced bridge pier was co-authored by Alam and his former PhD student Muntasir Billah—now a bridge engineer with Parsons in Vancouver. The results were published in the Journal of Structural Engineering, ASCE. 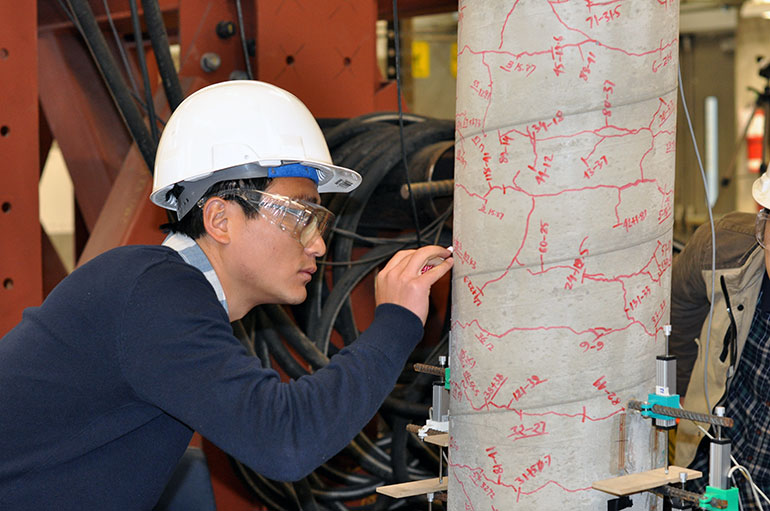 Student Peng Zhang traces cracks in the column during a strength test in UBC Okanagan’s Applied Laboratory for Advanced Materials and Structures.