A basic hand-grip test has proven to be a reliable tool to monitor the decline of patients with Parkinson’s diseases.

The study compared results from electromyography assessments of leg and arm muscles to basic physical performance tests such as gait speed, balance and hand-grip strength. The results were surprising.

“It became very clear that the hand-grip test was one of the functional tests that proved to be a reliable and valuable test measure,” says Jakobi. “The hand-grip test is an easy and conclusive way to test muscle strength decline in this group of people.”

The study involved 23 men and women with PD and 14 people without the disease, all 50 years or older living independently in Kelowna. The participants wore a portable monitoring device to measure muscle activity with the device recording electrical activity of muscles in the arms and legs for approximately eight hours. Participants also underwent three physical function tests—hand-grip, gait and balance—each morning and afternoon.

Jones says the data gleaned from the three physical tests was as conclusive and as informative as the lengthy recordings of muscle activity. And the tests were easier for participants and those administering the experiments.

“The hand-grip dynamometer is a tool that is easily accessible, easy to use, and is reliable,” says Jones. “In addition, they are readily available to health professionals such as family doctors, community therapists and physiotherapists.”

“It seems these devices have come full circle and are back being used by clinicians,” adds Jakobi. “It’s a tool that is ideal for Parkinson’s patients as you can easily record a decline in an individual’s physical strength and function as the disease progresses.”

Patients with PD suffer symptoms like uncontrollable shaking, slowness of movement, and eventually difficulty with balance, coordination and walking. It’s important for health care professionals to track early functional decline of Parkinson’s patients, says Jakobi. In this way, individual health can be monitored and future falls related to the disease prevented.

According to Statistics Canada more than 67,000 Canadians are living with Parkinson’s today, and it is mostly diagnosed in men over the age of 45.

The study was recently published in the journal Archives of Physical Medicine and Rehabilitation Science Direct.  This research was funded by the Canadian Institutes of Health Research, and the Parkinson Society of Canada. 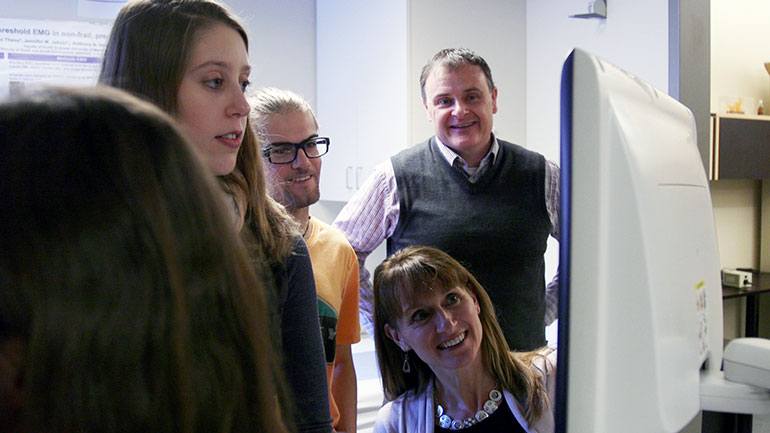