Art in the shape of a question

Visual artist Samuel Roy-Bois brings a critical point of view, not absolute truth, to the conversation with student artists 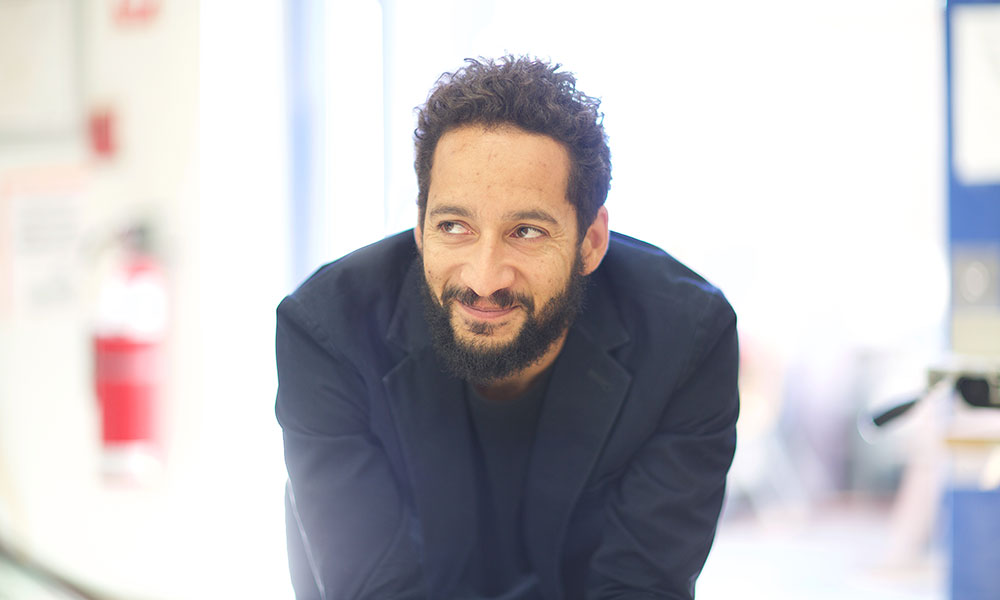 “Artwork is not an autonomous object without context. It belongs to reality.”

ART ISN’T A JOKE WITH A PUNCHLINE or a puzzle to be solved. It’s a question with many answers—none of which are necessarily right.

That philosophy is what guides Assistant Professor Samuel Roy-Bois as he mentors Visual Arts students in the Faculty of Creative and Critical Studies at UBC’s Okanagan campus.

“I like art when it is in the shape of a question and there are possible answers and interpretations but there is no one final interpretation that is unquestionable,” he says.

Roy-Bois is an accomplished sculpture and 3-D artist known internationally for his work with built environments that has been described as “simultaneously inviting and blocking audience participation.” He’s often commissioned to design complex installations including a recent project celebrating the 30th anniversary of the L’OEil de Poisson, an artist-run centre in Quebec that promotes experimental art and breakthrough practices.

The project, which featured the work of 175 artists, took two years to plan and a month to construct. It started with Roy-Bois inviting two artists to contribute a piece, who then invited two more artists or artisans to do the same.

“It was like a pyramid scheme, but legal,” he says. “When I showed up in Quebec City to install my piece I knew about the two artists I’d invited but the rest was a bit of a mystery.”

Each artist contributed one piece that Roy-Bois positioned in a maze-like wooden structure that wound throughout the gallery’s main space. Objects on display ranged from business-card sized drawings to sculptures the size of a small donkey.

The exhibit was well received and a success in Roy-Bois’ eyes because it brought artists together without imposing his vision of what is, or is not, good art.

Roy-Bois has been an artist since the age of seven when he told his parents he would one day be a “painterer.”

Today, he splits his time between Vancouver, where his wife works, and the Okanagan, where he teaches sculpture and 3-D Art Practices to classes ranging from 10 to 20 students each.

It is an intimate learning environment in which animated conversations between teacher and pupils helps fuel creativity in a safe and respectful way.

“Students will often put everything they have into their projects and are afraid of being judged, so it’s important for me to develop a respectful atmosphere so we can talk about the work in a critical manner, but without hurting anyone,” Roy-Bois says. “My opinion may be more informed and have more weight (than a student’s) but it is not the absolute truth. It is my point of view.”

Although art is subjective, marking students’ work is not as difficult as one might imagine. Roy-Bois considers a range of factors when evaluating the work, including where the student is coming from, how much ground has been covered, and what they learned in the process.

“It’s not just how successful the project is in the end but how much effort went in and how invested the student was in the process.”

“Sculpture and art is about engaging in conversation with other people, including other artists, and if you are good, people will look at your work in 300 years and wonder what you were trying to say,” he says. “Artwork is not an autonomous object without context. It belongs to reality and what is surrounding the object is influencing the way you are going to be reading the object.”

Roy-Bois is in the process of designing the Research Studio for Spaces and Things, a studio with funding support from the Canadian Foundation for Innovation. He is excited about the new space and the opportunity to help students develop core artistic qualities such as patience, creative thinking, and dedication.

“As an artist, you are in control and get to decide how the world will be, and for me that’s exciting. You can define the world through your art.”