The goal of personalized medicine

Medical Physics professor Christina Haston is a cancer combatant, working alongside the BC Cancer Agency 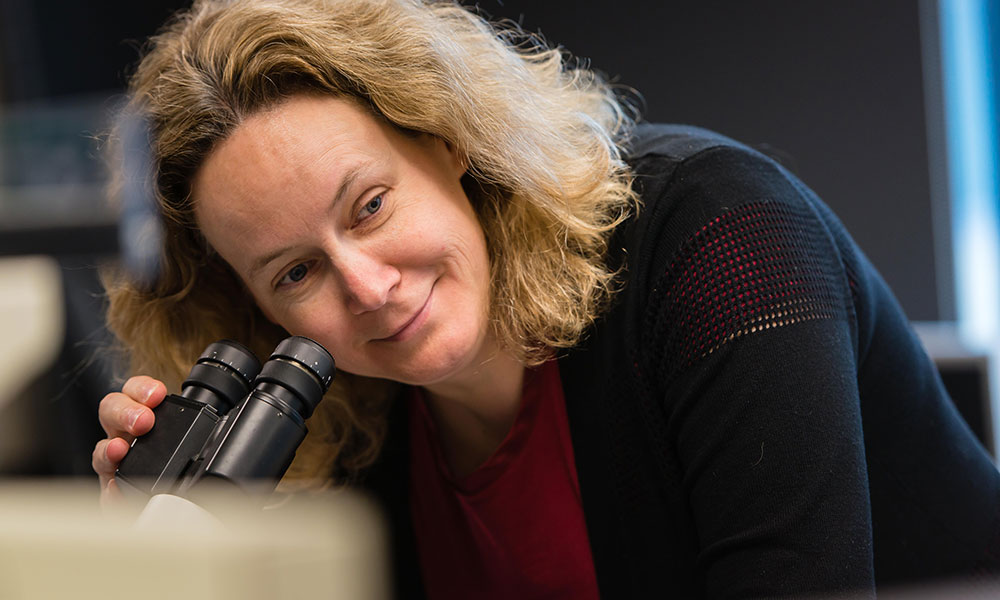 “I want to introduce the students to research that is living and breathing. I want them to learn beyond a textbook. I want them to see what UBC researchers are doing right now.”

As an undergraduate student studying biophysics at the University of Western Ontario, it was a fellow teammate on a rec softball team who suggested to Haston that she consider presenting her thesis project on nuclear medicine to researchers at the hospital, as well as her university supervisor and peers.

Intrigued, Haston seized the opportunity. But what she did not expect was how inspiring and moving the experience would be, offering her a firsthand look into how research impacts the health-care industry and how it can benefit patients.

Now, as a Medical Physics professor at UBC’s Okanagan campus, Haston is working alongside a team of researchers at the BC Cancer Agency to uncover why some patients fall ill from radiation therapy while other patients do not.

“The goal is personalized medicine,” Haston says. “We are collecting data and studying why some patients get very sick from radiation. We want to know why these patients’ bodies react this way and if there’s a mechanistic basis to this reaction.

“Our philosophy is if there is something about you that we can measure, something that tells us you are going to be sensitive to radiation, then we can tailor your treatment accordingly. Essentially, physicians and physicists would be armed with patient information to predict this outcome and can spare the patient of any sickness.”

Funded by the Canadian Institutes of Health Research (CHIR), Haston closely examines the genetic basis to determine the specific gene that predicts for sensitivity. In studies with mice, she has confirmed there is something in an individual’s genes or set of chromosomes that can predict who gets sick and who does not. She’s narrowed it down to one section of one chromosome.

“For me, this is great progress,” she says. “At face value, it may not appear significant, but instead of looking at 23 pairs of chromosomes in the human body, we now have a particular genetic region in mind that we can further investigate in mice and in people.”

‘THE NEXT BIG THING’

In 2013, Science Magazine recognized cancer immunotherapy as the “Breakthrough of the Year.”

According to Haston, immunotherapy harvests the capability of your immune system to fight a tumor. As radiation elicits an immune response, Haston believes the immune response can also be harnessed to fight the tumor.

“I think the response to radiation, plus a person’s innate immune response, can be better combined to achieve cancer care. I feel strongly that this is the next big thing in cancer research. It’s what I would like my lab and graduate students to work towards,” she says.

Haston sees cancer treatments being changed due to the “natural fit” of immunotherapy and radiation therapy.

“It’s an exciting time for medical physics at UBC Okanagan. The graduate program is expanding, and it’s so greatly partnered with the BC Cancer Agency, as well as the University of Victoria,” she says. “I am so happy to be part of an organization that welcomes and advances research.”

“This campus has a pulse,” Haston adds. “We have the backbone of the University of British Columbia, plus an opportunity to develop this newer campus. I get excited to come here every day.”

In addition to the research opportunities at UBC Okanagan, Haston is back in teaching mode, offering courses in both introduction to medical physics and introduction to biophysics—two subjects that are close to her heart.

In an effort to inspire and bring alternative research into the classroom, Haston regularly invites guest lecturers from across the campus, having experts from Chemistry and the Faculty of Health and Social Development for instance, to share and present their work in relation to medical physics and how their work can be applied to the field.

“I want to introduce the students to research that is living and breathing. I want them to learn beyond a textbook. I want them to see what UBC researchers are doing right now.”

Haston admits that her biggest thrill as a professor is watching students graduate.

“When my students receive their master’s and doctorate, I am always reminded and touched to see a person, who I have known for years, earn their degree.

“It is so humbling to know that I had a part and some impact in shaping a student’s academic journey.”