Shedding light on the legacy of colonialism

For alumnus Marlowe Sam, a university campus situated in the traditional territory of the Okanagan Sylix people has distinct advantages 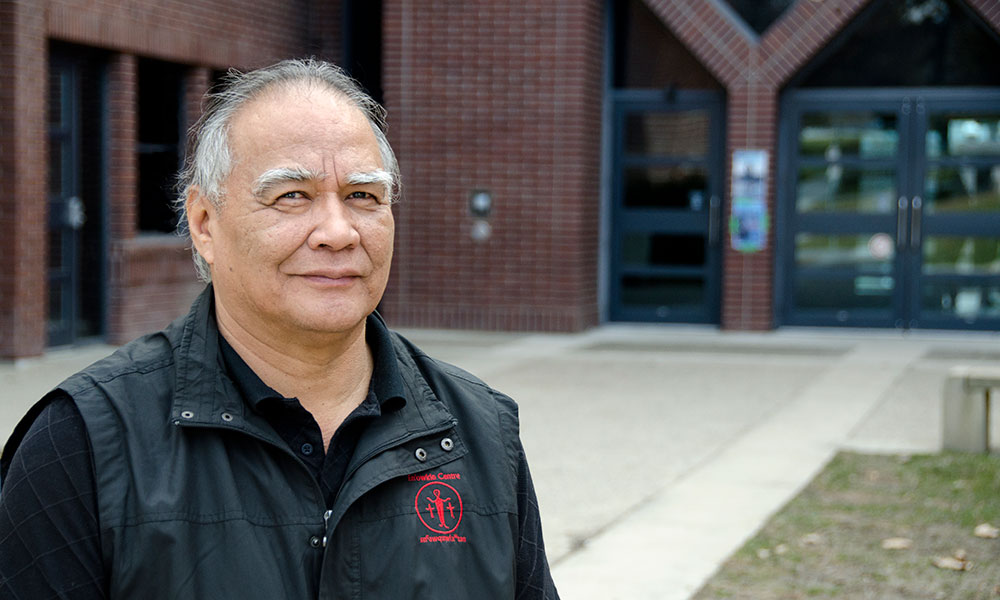 “I developed academic relationships with a number of professors who helped shape my future as an academic.”

MARLOWE SAM WAS ONE OF THE FIRST two indigenous students to earn a PhD at UBC’s Okanagan campus, but his journey to this accomplishment began as an Anthropology undergraduate during the campus’ earliest years.

Descended from the Salish-speaking Wenatchi people from Eastern Washington State, Sam now resides in Penticton but remains a member of the Colville Confederated Tribes of Washington. Part of his people’s traditional territory lies in the Okanagan Valley, and UBC’s Okanagan campus is uniquely situated in a Canadian portion of the traditional territory of the Okanagan Sylix people.

Having a university campus in his traditional territory allowed Sam to focus his studies on issues that related and mattered to his community.Why Indigenous Studies?

“I credit many of the knowledge keepers of the Okanagan (Sylix) people with providing me valuable perspectives on what became my primary focus as a graduate student—water. I developed academic relationships with a number of professors in the Indigenous Studies and Anthropology departments who helped shape my future as an academic.”

Though Sam would graduate top of his undergraduate class, earning the UBC Okanagan Medal of Arts, he says that the start of his academic journey was rocky. One of his biggest challenges was learning to write in the academic style.

“As an indigenous person, I spoke what is sometimes referred to as ‘rez English.’ It’s difficult to explain exactly what this is, but it is filled with colloquial language, so there was a big learning curve to actually use the English expected in a university setting.”

Sam credits the professors in the Anthropology department with helping him to grow as a writer and instil in him a desire to improve his writing skills. As a new professor, he is now putting these skills to use in preparing information for a proposed book on the history of Salish-speaking peoples, and also sitting on the editorial board of the En’owkin Centre in Penticton, where he will screen submissions of young Aboriginal youth writers to include in an anthology of water-related stories and issues.

Sam now teaches at UBC Okanagan, the university campus that helped him grow as a student, researcher and academic.

“I feel this is my calling,” he says. “I like teaching and having the opportunity to change people’s perspectives. Even a lot of our own people do not know Okanagan history and the impacts of colonialism.”

Many Aboriginals feel the burden of colonialism from their history with residential schools. Sam wants to shed light on the legacy of colonialism, providing historical context to both Aboriginal and non-Aboriginal students. Understanding that history helps lift the burdens of oppression, guilt and raises confidence among students that they can carve out their own futures.

“I like to have the ability to open those doors for both Aboriginal students and non-Aboriginal students,” he says. “I teach different methodologies. I don’t lecture students with a certain point of view but let them come to their own conclusions. It opens up the learning channels for them—so it doesn’t end up shutting doors.”

His research and teaching interests lie in indigenous/Aboriginal water rights, indigenous resistance to economic and military globalization, and Interior Plateau Salish history. His years of academic study have also earned him a recognized place in the community, where he is regularly called upon both nationally and internationally to provide expertise and advice on Aboriginal and human rights issues.

“It’s exciting to work within the system,” says Sam. He credits UBC for having the foresight to help Aboriginal people gain a higher education, beyond undergraduate degrees.

“UBCO and Indigenous Studies are pretty unique to our area,” he says, adding how informal discussions could lead to Syilx courses being offered at several other post-secondary institutions in BC and the Wenatchee and Colville areas of Washington.

This in turn brings a world of possibility to Sam’s doorstep, in extending his knowledge to new generations and people on both sides of the 49th parallel.

“There’s a big interest around the content,” he says. “I don’t know if that’s done yet anywhere else across North America, with institutions across borders cooperating like this. It will be interesting to see if it turns into anything.”

If it does, Sam plans to be part of that pioneering effort.