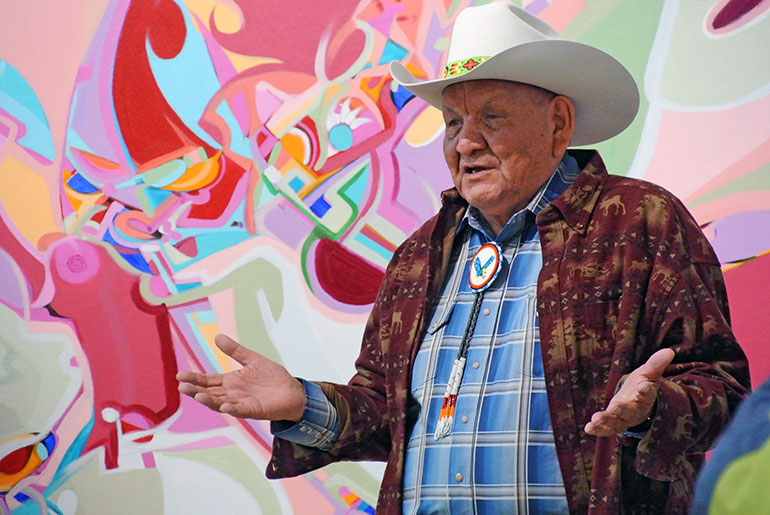 One of Canada’s most iconic Aboriginal artists Alex Janvier will be presented with an honorary degree at UBC on June 8.

UBC’s Okanagan campus is celebrating not only the accomplishments of its students during convocation this week but also the unique work of Canadian artist Alex Janvier.

Janvier is well known on the Okanagan campus as he was the artist-in-residence within the Faculty of Creative and Critical Studies in 2014. The UBC community is excited to welcome him back to campus and to present him with an honorary degree—a recognition of substantial contributions to society at the provincial, national or international level, says UBC’s Deputy Vice-Chancellor and Principal Deborah Buszard.

“Alex Janvier stands among Canada’s greatest artists. His powerful works are an inspiration to our students and should be experienced by everyone,” says Buszard. “UBC is delighted to have the opportunity to bestow Mr. Janvier with an honorary degree, particularly in light of his close connection to the Okanagan campus.”

His work is described as “universal in appeal” and during the past year, 150 of his paintings and drawings have been featured in a major retrospective at the National Gallery of Canada. As a First Nations person emerging from a history of oppression and the many struggles for cultural empowerment, Janvier paints both the challenges and celebrations that he has encountered in his lifetime. He proudly credits the beadwork and birch bark basketry of his mother and other relatives as influencing his art.

Born of Dene Suline and Saulteaux descent in 1935, Janvier was raised with his family until he was eight. At that time he was sent to a residential school near St. Paul, Alberta. Despite the traumas of the residential school system, the school principal recognized and encouraged his artistic talent, and he was given the tools to create his first paintings.

Unlike many Aboriginal artists of his time, Janvier received formal art training from the Alberta College of Art in Calgary and graduated with honours in 1960. Immediately after graduation, he began to instruct art at the University of Alberta.

In 1966, he was awarded a major commission from the Department of Indian and Northern Affairs to create a series of 80 paintings and a year later he gathered a group of Canada’s foremost Indigenous artists for the Indians of Canada Pavilion at Expo ’67.

Janvier is a member of the Order of Canada and the Alberta Order of Excellence. He is a recipient of the Governor-General’s Award in Visual and Media Arts, and the Centennial Medal of the Province of Alberta. He is one of the last members of the acclaimed artist collective known as the Indian Group of Seven.

In 2012, the new Janvier Gallery opened on Cold Lake First Nations 149B, which is located north of the City of Cold Lake, Alberta