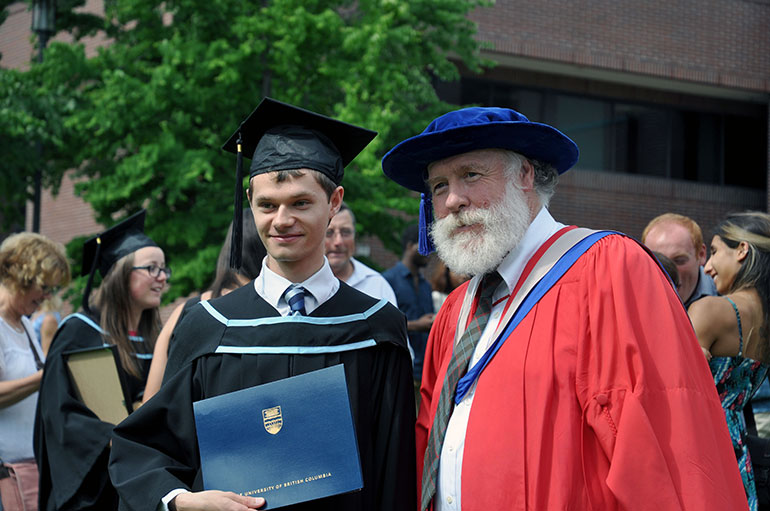 Being a top-level student isn’t easy, especially when you’re literally saving lives in your free time. But that’s all in a day’s work for UBC Okanagan’s Raphael Nowak, winner of a top $10,000 academic prize.

Now in its eighth year, the prize recognizes a top graduating student in the Irving K. Barber School of Arts and Sciences for academic and community leadership.

“It’s a huge honour,” says Nowak. “It’s very kind for organizations like this to recognize individuals who have gone above and beyond in the community while remaining committed to academics as well.”

While studying Earth and Environmental Sciences (Freshwater Science), Nowak is also a tireless volunteer at Kelowna General Hospital and with the Central Okanagan Search and Rescue. He’s accumulated a lengthy list of qualifications and accomplishments, and remains on call to take part in lifesaving operations around Lake Okanagan—all while managing to stay on the Dean’s list for three straight years.

“He represents the kind of smart, community-engaged, socially-conscious, and public service-oriented leaders that our faculty endeavors to cultivate and prepare for Canada and the world,” says Irving K. Barber School of Arts and Sciences Dean Wisdom Tettey. “He’s not only an exemplar of an excellent and dedicated student, but also a model of the future generation of citizens and leaders from UBC who understand the value of giving back.”

Serving the community is a big part of Nowak’s drive, and that work, along with his stellar academic record, is a key reason why he is the recipient of the largest undergraduate award given to a UBC Okanagan student. Nowak has maintained a perfect attendance record in class, despite spending thousands of hours volunteering.

“During my entire undergraduate degree, I’ve been associated with search and rescue involvement, balancing callouts, sometimes all night, in addition to volunteering at KGH on weekends. I try and discipline myself. I don’t go beyond what I know I can do. My highest priority is always my education.”

With such an impressive list of accomplishments, it is easy to see why James Paterson, managing partner at Pushor Mitchell LLP, says the firm is proud to support Nowak through the award.

Nowak also acknowledges the impact being a student at UBC Okanagan has had on him. It’s not just about the knowledge he has gained, but the skills he has developed to be able to think critically and analytically, whether in a chemistry class or a search and rescue situation.

And he’s thankful of the strong support he’s received from his professors, most notably from Bernard Bauer, Jeff Curtis and Ian Walker.

“As I reflect on my past four years, all my instructors have been fantastic,” says Nowak. “Professor Walker recommended that I take freshwater science. I corresponded with him when I was in Grade 10, when I was identifying some aquatic plants in Okanagan Lake. He’s been a big supporter, and kept my interest going.”

Nowak plans to stay busy following convocation. He’s writing a book on Okanagan Lake, drawing on years of personal research and investigations. He also aims to apply for UBC’s Southern Medical Program, saying the Pushor Mitchell prize will help him stay committed to his education and extracurricular involvement.

“This scholarship will help me to remain focused on these values, and enable me to give back to society in an even greater way as a result of my future education.”