President makes each ceremony remarkable with songs, a football, and a sense of humour

“This is my favourite part of my job. And I have a pretty fun job,” UBC President Santa Ono told the audience Thursday. “This day is all about you and what you have achieved through your hard work, imagination and inspiration.”

This is Ono’s first convocation at UBC Okanagan since he became university president last summer. Each ceremony was different as he organized harmonized chants, invited students on stage to sing, pitched a football into the crowd, and encouraged the entire audience, including faculty and dignitaries, to do the wave.

He addressed each ceremony, congratulating the students and encouraging them to make changes in the world that will not only benefit them, but society as a whole. He spoke of the success of previous graduates, including Canadian Prime Minister Justin Trudeau, and welcomed graduating class of 2017 to the UBC family of alumni which spans the globe.

On Thursday, Canadian artist Alex Janvier was presented with an honorary degree. Janvier, who was sent to a residential school as a child, talked about learning concepts foreign to him like “a dad who went to work in a car, a dog named spot and Donald Duck.” It was at residential school where his artistic talent was recognized and, despite the hardship there, he went on to receive formal training from the Alberta College of Art in Calgary and graduated with honours in 1960. Immediately after graduation, he began to instruct art at the University of Alberta.

Janvier described himself as someone once labelled the ‘least likely to succeed.’ He’s now a celebrated artist and the recipient of the Order of Canada, among many other accolades. Janvier impressed upon the students to always believe in themselves.

“I believed in myself and I was so happy to be able to hold a paintbrush and create art that came from a deep place in my soul,” he said. “I leave you with a few words. Be bold, create, dare to be fearless…go forward graduates.”

Deborah Buszard, Deputy Vice-Chancellor and Principal of the Okanagan campus, called the graduating students ‘change agents’ of the future. During her speech she thanked them for the work they have done in the community, both on and off campus, while attending university. She thanked them for raising funds for a new learning centre, for raising tuition money to support Syrian refugees attending the Okanagan campus next year.

“Imagine the difference your contribution will make in their lives, and the lives of their families, to these people who are living in refugee camps,” Buszard said. “By your giving acts, you have played a vital role in defining what this campus will look like for many years into the future.”

And while graduation is a time of joy, UBC administration paused for a moment to present two posthumous degrees: one to Sydney Bednarik, and one to Melissa Mimura, offered to their family members at the ceremony.

Ono gave some parting advice to the young graduates, explaining there are two types of ‘learning’ they will do throughout life. 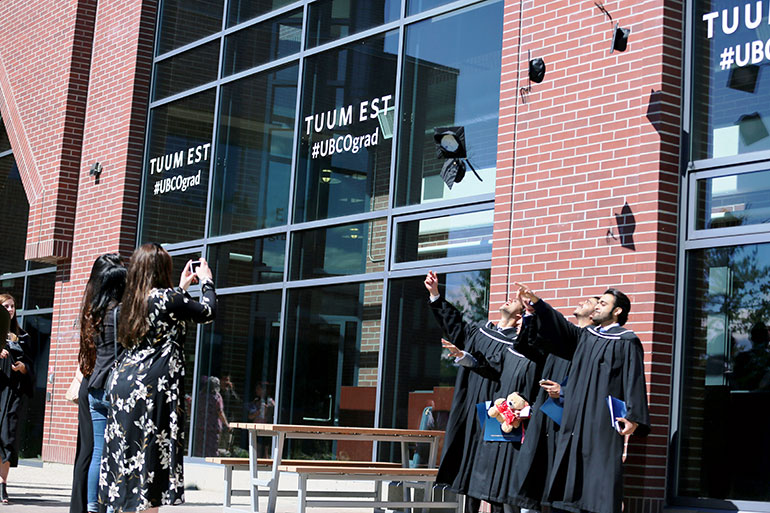 Graduates throw their mortarboards into the air to celebrate their success after receiving their degrees.