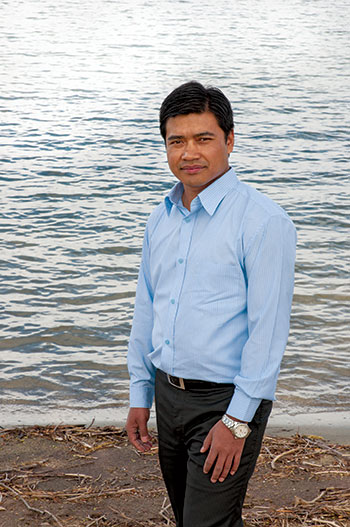 The beauty of a lush green lawn may be more costly than just the use of water, according to researchers at UBC’s Okanagan campus.

Gyan Kumar Chhipi Shrestha, a PhD candidate with the School of Engineering, has recently published several research papers about water use, water distribution systems, and the energy consumed supplying water to homes. Not only did he examine the cost of supplying water to homes, but also investigated the long-term, or life cycle costs, of water distribution systems to several communities.

And the ecological footprint is staggering, he says, when the energy used to distribute water is considered.

“The Okanagan Valley is a semi-arid region and even though we have lots of lakes, the valley also has the lowest amount of freshwater available in Canada,” says Chhipi Shrestha. “At the same time, we have one of the highest per capita use of domestic water in the country.”

Chhipi Shrestha says there is a huge disconnect between the amount of water available in the Okanagan and the amount used. At its peak in the summer, the rate of consumption in the Okanagan is about a 1,000 litres per person per day—compared to the Canadian average of more than 340 litres a day. This overuse, he says, is primarily due to residential lawn irrigation.

Working with UBC Okanagan’s Associate Dean of Engineering Rehan Sadiq, co-supervisor of the study, Chhipi Shrestha’s research specifically examines water distribution systems in various residential densities, how much these systems cost to operate, and how reductions can be implemented.

“Water, energy, and carbon emissions are important elements of urban water sustainability; these elements are interconnected,” says Sadiq. “And neighbourhood densification is a strategy primarily applied to reduce per capita infrastructure and land requirement and densification also affect residential landscaping and water systems.”

Along with supervisor Prof. Kasun Hewage, Chhipi Shrestha used a planned neighbourhood under development in Peachland as a case study and compared 11 neighbourhood design options of single and multi-family homes and various population densities. Hewage says the cost of water distribution systems can be lower in high-density residences, mostly because single family homes tend to have landscaped areas that require maintenance.

“The densities of neighbourhoods affect water demand, and we’re looking for an optimal density,”
he explains. “We wanted to a find a balance between increased density and decreased water consumption. When we look at single-family homes, generally 40 to 60 per cent of a property area is landscaped and will require water to maintain them.”