Big and strong may not last as long, according to UBC prof 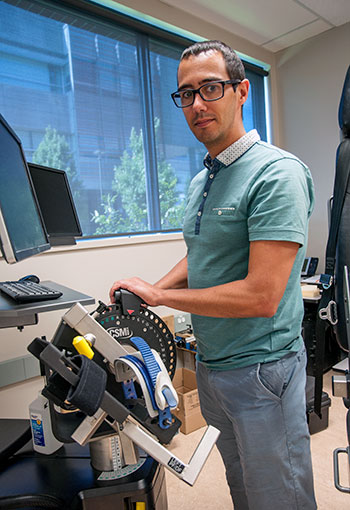 In the battle of the sexes, new UBC research suggests that men may be stronger physically but women have much greater muscle endurance than their male counterparts.

In a new study from UBC’s Okanagan campus, researchers in the School of Health and Exercise Sciences have found that women are considerably less exhausted after natural, dynamic muscle exercises than men of similar age and athletic ability.

“We’ve known for some time that women are less fatigable than men during isometric muscle tests – static exercises where joints don’t move, such as holding a weight – but we wanted to find out if that’s true during more dynamic and practical everyday movements,” says Assistant Professor Brian Dalton. “And the answer is pretty definitive: women can outlast men by a wide margin.”

In his study, done in collaboration with the University of Guelph and University of Oregon, Dalton recruited eight men and nine women that were at a similar level of physical fitness. Participants were asked to flex their foot against a suite of sensors as quickly as they could 200 times. The speed, power and torque of their movements and electrical activity of their muscles was then captured and recorded over time.

“We chose to measure foot movements because it makes use of calf muscles on the back of the leg, which are essential for practical, everyday tasks like standing and walking,” says Dalton. “What we found is that males were faster and more powerful at first but became more fatigued much faster than females.”

While only one isolated muscle group was studied, Dalton says he would expect similar results for other muscles groups and his results are consistent with what has been observed elsewhere.

“We know from previous research that for events like ultra-trail running, males may complete them faster but females are considerably less tired by the end,” he adds. “If ever an ultra-ultra-marathon is developed, women may well dominate in that arena.”

But it’s not all about competition. Dalton says his results can also inform more practical applications, such as designing exercise programs or even adapting work environments to minimize work-related fatigue and improve overall productivity.

“We may, for example, want to lower the load for males, even though they may be stronger at the outset, to more closely match the endurance observed in females,” he says. “Both sexes have valuable physical abilities and it only makes sense that we study and develop the tools to afford them the best advantage.”

“There’s no battle at all,” he jokes. “Maybe more of a balance of the sexes.”

The study appears in the June 2017 issue of Applied Physiology, Nutrition, and Metabolism and was conducted with financial support from Natural Sciences and Engineering Research Council of Canada.

UBC’s Okanagan campus is an innovative hub for research and learning in the heart of British Columbia’s stunning Okanagan Valley. Ranked among the top 20 public universities in the world, UBC is home to bold thinking and discoveries that make a difference. Established in 2005, the Okanagan campus combines a globally recognized UBC education with a tight-knit and entrepreneurial community that welcomes students and faculty from around the world. For more visit ok.ubc.ca