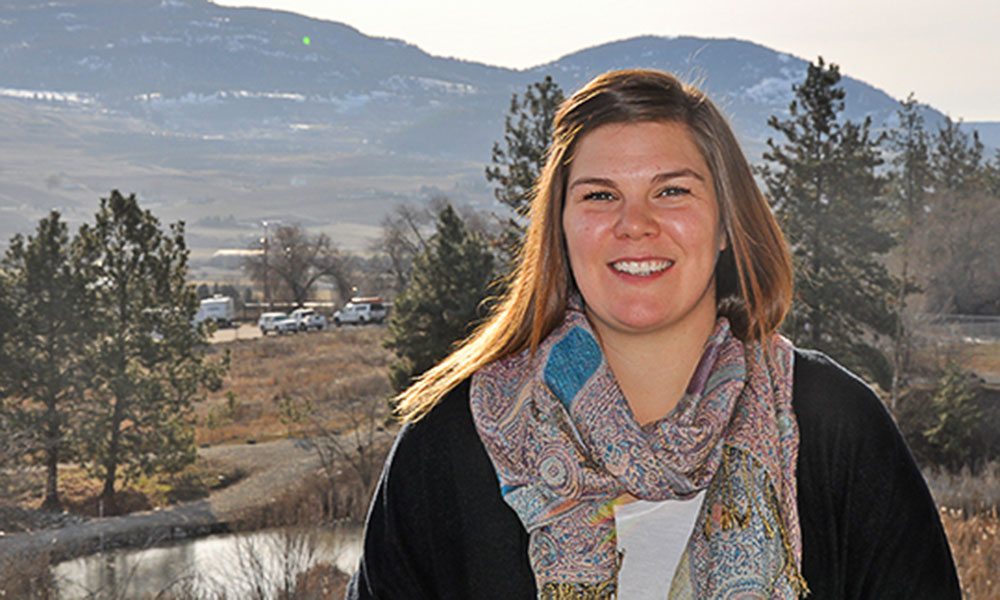 Education
Bachelor of Education (in progress)

“We need to evolve our teaching practice to match the tone of society, because students don’t learn what I learned, or how I learned, while I was in school.”

BRENNA ELLIS DIDN’T MUCH LIKE SCHOOL until she decided to become a teacher.

“My whole life I struggled with school,” she says. “I was a reluctant reader; I struggled with math and had major test anxiety. I always thought I wanted to be a high school teacher in order to help students struggling with those issues in school, but when I was having those same struggles in university, I decided to take a year off to work as an au pair in Germany.”

Ellis lived in Natendorf, a small municipality in northern Germany, a 45-minute train ride to Hamburg. While in Germany, Brenna looked after three young children who educated her in thinking about school in a different way.

“While I was living in Germany, I didn’t know much German,” Ellis says. “The kids I watched would conduct ‘school sessions’ where they taught me simple German words. It was a really cool experience—a 7 year old was my teacher!” 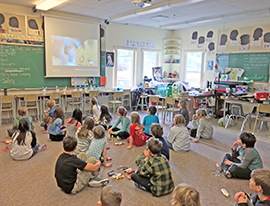 Teacher candidate Brenna Ellis’s class during her practicum at Giant’s Head Elementary in Summerland, BC.

It was this new approach to learning that prompted Ellis to give post-secondary education in Canada another try and apply for the Bachelor of Education (BEd) program at UBC Okanagan’s campus in Kelowna, BC.

“Going through the program, I began to realize that school has changed and how we’re teaching students is very different from how I learned while I was in school. The focus is now on the student—where it should be!”

Now in the final year of the BEd program, and having just finished her practicum—teaching in her old elementary school, Giant’s Head Elementary in Summerland BC, Ellis learned that by letting students control the learning, you never know what each day will bring.

Instead of delivering the school experience she had disliked so much as a learner—with desks lined up in rows, students listening to the teacher lecture at the front of the class for hours—she created an environment where students became explorers charting an unknown course to the yet-to-be discovered Canada. Every action the young explorers made had a consequence, a nod to the Choose Your Own Adventure series of children’s gamebooks.

Find out more about studies in Education

The activity was intended to teach the students about Canada’s unique history, from the perspective of early explorers and the First Nations peoples.

Ellis says, “The students understood the material and the injustice right away; they didn’t think it was fair that the explorers co-opted the land from the Aboriginal Peoples.”

Students in Ellis’s class also played the role of engineers when they were challenged with designing a prosthetic limb for an Olympic athlete that would enable, but not enhance, performance. Ellis was inspired to create the teaching opportunity by a Maker Day she participated in while in the BEd program.

The Maker Day approach fosters teaching activities that operate on the premise that individuals can learn with an open process that supports tinkering, design thinking and purposeful play. Maker Day students (of all ages) are given a real-world challenge to solve through their own designs. Students then use their designs to create a prototype of the solution using supplies in a Group Kit —pipe cleaners, cardboard, pompoms, and almost anything else you might find at a craft store.

“The Maker Day activity was on the last day of my practicum,” Ellis says. “We were teaching the students about the human body, and I was inspired by a video of a man in the UK who created a prosthetic limb for his son when he found out that his child wasn’t allowed to have one until he was three years old.”

When Ellis brought the idea of creating a Maker Day to the Grade 4/5 team at her practicum school, Giant’s Head Elementary—in fact, the school she attended when she was a child—the other teachers were nervous but supportive of the young teacher trying to introduce new approaches to learning in the classroom.

“If you’re going to stumble, your practicum is where you should do it,” Ellis says. “You have a team to support you if and when you make mistakes.”

The students in Ellis’s practicum class didn’t know what was happening when they entered the classroom—they found desks pushed to the sides, and giant piles of cardboard stacked around the room.

“One bright student was hesitant to be involved in the activity because he didn’t think he was smart enough for his group,” she says. “It turned out that because he had a mechanical brain, he was perfect for the activity. He was able to find confidence in himself while learning—and that was huge for him!”

Susan Crichton, Director of the Innovative Learning Centre, which hosts Maker Days, was not surprised that the student had a successful experience.

“Everyone and anyone who fully participates in Maker Days will experience success because it is the learning centres in the process more than the product. Risk taking and experimentation are not only encouraged but required!” says Crichton.

With only a few months to go before 2017 graduation, Ellis is thinking next steps, which include international travel.

She’s moving to Australia on a travel Visa with aspirations of teaching and learning within the Australian system.

“Australia completely redesigned their learning curriculum in 2014, similar to the changes that happened in BC, so I’ll be interested to see the differences and similarities.”

Although Australia is the next step, teaching and learning in BC is her end goal.

Born and raised in Summerland, BC, Ellis hopes to go back to her childhood home and learn amongst the teachers that inspired her while she was in school.

“Darcy Mullin, my Grade 7 teacher was the only teacher to this day that was able to help me understand math,” she says. “I’m hoping that one day I’ll be able to grow and learn from him.”

She credits the amount of practical experience she had while in UBC Okanagan’s Bachelor of Education program for her desire to think outside the box when it comes to teaching and learning.

“My ‘Mentor Teachers’ gave me the freedom to try absolutely anything,” she says.

“We need to evolve our teaching practice to match the tone of society, because students don’t learn what I learned, or how I learned, while I was in school.

“Participating in the Education program at UBC Okanagan taught me that.”