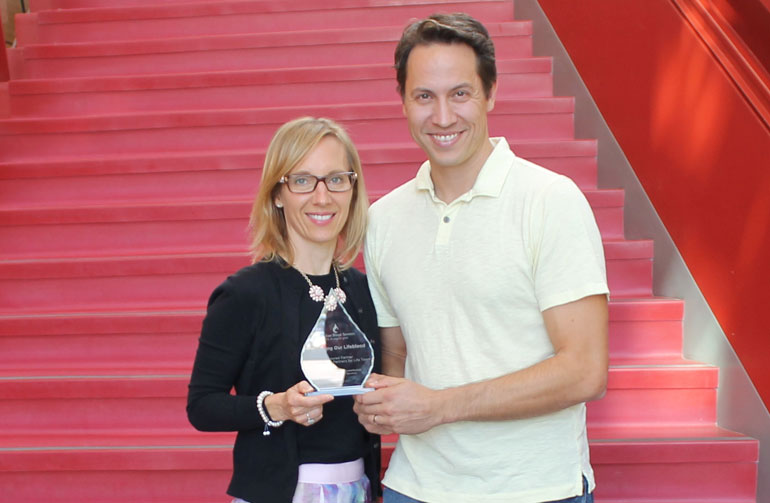 The UBC Okanagan Partners for Life Team was recently recognized at the 2017 Canadian Blood Services Honouring Our Lifeblood award ceremony for significantly increasing the number of blood donations from students, faculty, staff and alumni.

“In over three years, we have grown our donations pledge from 100 units of blood in 2014 to 500 units in 2017,” says Warren Brock, Partners for Life Champion. “With assistance across the UBC Okanagan campus community, we have also supported the work of Canadian Blood Services with 1,000 volunteer hours annually.”

Donated blood and blood products can be used for a variety of medical treatments. Red blood cells are generally used for emergency care or surgeries, while platelets and plasma help cancer patients or those undergoing extensive surgery.

The Canadian Blood Services Partners for Life program works with companies, government agencies and community organizations to encourage people to donate blood, platelets and plasma as a group. The UBC Okanagan team was selected as the 2017 BC and Yukon regional representative for program excellence.

Brock attributes much of the team’s success to effective partnerships with various campus groups including Athletics, alumni UBC, and student blood and stem cell clubs. In particular, students from the School of Nursing have played an integral role in recruiting new blood donors as part of their program studies.

“We were pleased to honour UBC Okanagan with a national partnership award for increasing awareness among university students, faculty and staff about the need for more blood donors,” says Gayle Voyer, territory manager in Kelowna with Canadian Blood Services. “We hope this year’s honourees will inspire other Canadians to take action for Canadian patients in need.”