UBC researchers take the ‘stink’ out of wastewater treatment 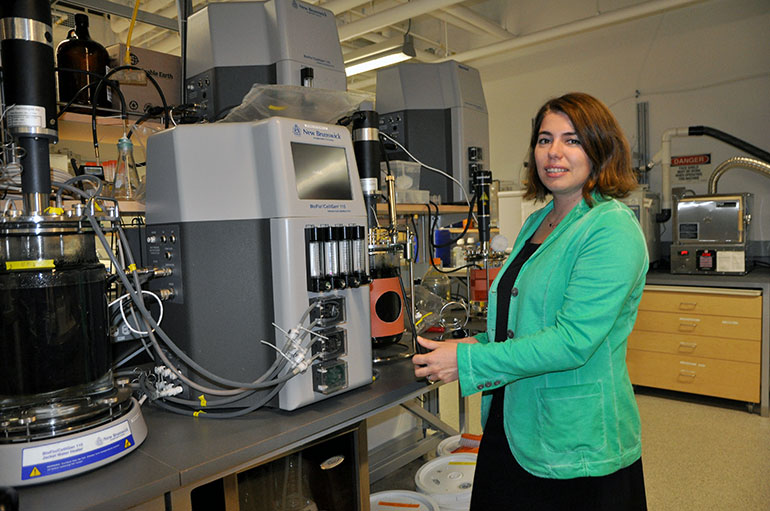 Cigdem Eskicioglu is a professor of engineering at UBC’s Okanagan Campus.

Smelly sludge improves with the right timing of common additives

A foul smell and safety concerns can leave many residents turning their nose at the idea of a wastewater treatment plant in their neighbourhood.

But researchers from UBC’s Okanagan campus have developed a new way of making wastewater treatment dramatically safer and better smelling by using common and inexpensive chemicals.

Cigdem Eskicioglu, an associate professor with UBC Okanagan’s School of Engineering, says many wastewater treatment facilities use anaerobic digestion – microorganisms fermenting organic waste – as an effective way to recover energy and nutrients from wastewater residual sludge. However, the process also produces toxic, corrosive and extremely odourous sulfuric gases, like hydrogen sulfide, which prevented many communities from adopting the technology.

“There are strong arguments for wastewater treatment facilities to use anaerobic digestion, but the equipment required to control odour and to make the biogas safe have been an expensive barrier,” says Eskicioglu, co-author on the study. “We’ve discovered a formula that seems to solve that problem.”

Eskicioglu, postdoctoral research fellow Deniz Akgul, and PhD student Timothy Abbott tested novel combinations and doses of common commercial chemicals, called metal salts, during the fermentation process to see if the offensive smells could be controlled. The results were dramatic.

“Not only were we able to reduce the production of sulfuric gases by 93 per cent, to the point that they became nearly imperceptible, but we unexpectedly discovered that pathogenic fecal coliforms in the digested sludge were reduced by 83 per cent,” says Abbott. “Digestion performance and biogas production remained completely intact and the leftover material was much safer for eventual use in applications such as agricultural fertilizers.”

The researchers also discovered that adding metal salts significantly improved their ability to remove water from the digested sludge, which is a necessary step for final disposal.

While metal salts have long been used in wastewater treatment to control smell, it’s their unique doses and point of addition during the fermentation process that seems to be particularly effective in controlling odour and pathogens, according to Abbott. He also points out that the cost of adopting their technique is minimal.

“We estimate that a medium-sized treatment facility, like the one in Kelowna, would need to spend only $10,000 annually on chemicals,” he explains. “With such a low-cost and effective means of controlling sulfuric gases and pathogens, wastewater managers could realize all the benefits of anaerobic digestion without the considerable costs of installing and maintaining traditional biogas sulfur scrubbing equipment.”

“This could be a real game changer.”

The study was published in Science of The Total Environment with financial support from the Natural Science and Engineering Council of Canada (NSERC) and from the Scientific and Technological Research Council of Turkey (TUBITAK).