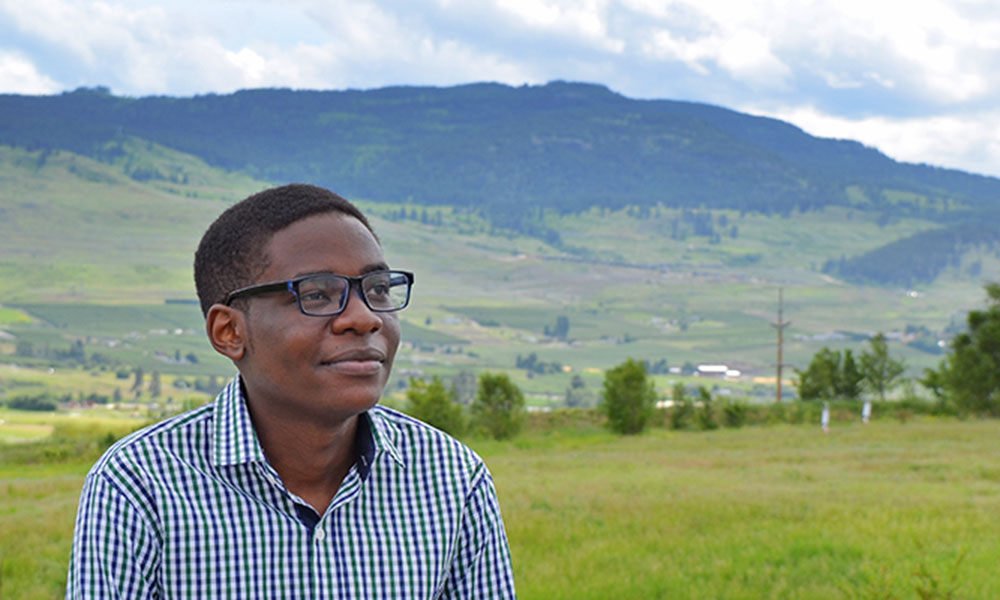 “I want to provide people with the opportunity to realize their full potential, whether that means teaching or starting a business.”

FROM AN INTEREST IN MANAGEMENT to a future full of potential, Philip Jaling is making the most of his undergraduate career.

Find out more about the BMgt program

The Bachelor of Management student was inspired by his mother and her work leading a logistics management company in Nairobi, Kenya. She always encouraged him to be persistent in pursing his goals, and from a young age he began to look for better opportunities and an international education.

Now in his final year of studies at UBC’s Okanagan campus, Jaling has made the most of his undergraduate experience by saying “yes” when presented with an opportunity. This motto has yielded an array of experiences that are opening doors for his future endeavours.

In the summer following his first year, Jaling met with Associate Professor of Economics Dr. John Janmaat to learn more about his research. This meeting opened his eyes to the opportunities available in academia.

“I’m extremely grateful to have met John,” Jaling says. “Working with him has been a wonderful experience, and I consider him one of my greatest mentors in Canada.”

Following their meeting, Janmaat invited Jaling to work with him on a research project. A second-year student at the time, Jaling was initially intimidated, as he worried that he did not have the skills necessary to work alongside a researcher. However, after having a conversation with Janmaat, Jaling decided that it would be a good fit. “John was very calm, yet encouraging and supportive,” he explains. “I knew that he was someone I wanted to work with.”

Janmaat’s economics research measures the impacts of environmental interventions on communities throughout the Okanagan. During that first summer, Jaling provided support by analyzing results of some earlier surveys and conducting some GIS work with another undergraduate student.

After completing his third year of studies, Jaling worked with Janmaat again, tasked with creating a survey to record the value that people in the region place on environmental goods and services.

He appreciated the interdisciplinary aspect of the research, as it combined economics with environmental and management studies. He was also given a lot of responsibilities, an opportunity he values.

“I had to learn how to code in HTML to create the survey, and I ran my own focus groups for it,” Jaling says. “Although at times it was challenging, I’m really appreciative that John granted me such autonomy, while always offering support when I needed it.”

He realized the importance of community engagement and collaboration in the research process. He met with leaders from the Splatsin First Nation, environmental experts from the regional districts of Central and Northern Okanagan, and partners from the Okanagan Collaborative Conservation Program. He also received support from Sustainability Professor Dr. Lael Parrott and an International Undergraduate Research Award from the Faculty of Management.

“All of these people had wonderful ideas and taught me important things about the environment,” Jaling says. “Making those connections within the community was imperative because their contributions to the research helped me to complete the survey.”

He distributed the survey to two focus groups, which provided him with useful feedback. In early October, the revised survey will receive further feedback from a third and final focus group. Following this, the finalized survey will be distributed to 5,000 households across the Central and Northern Okanagan region. Janmaat and Jaling are hoping to begin analyzing the data in January 2018.

After wrapping up his undergraduate research and completing his final year at UBC Okanagan, Jaling will be heading to Saskatchewan, where he has been accepted into the University of Saskatchewan’s Master of Professional Accounting program.

“Achieving a master’s degree leaves the door to academia open for me,” Jaling explains. “It allows me the potential to become a professor in the future, if that’s something I decide I want to pursue.”

Upon completion of graduate studies, Jaling hopes to work in Calgary, as he loves the entrepreneurial spirit of the city. But at the end of the day, Kenya is home.

“Once I gain experience, I want to return to Kenya and make a contribution to the success of the country. I want to provide people with the opportunity to realize their full potential, whether that means teaching or starting a business.”

In the meantime, he is focused on meeting as many new people and gaining as many new experiences as he can in Kelowna. “My advice to fellow Management students is to say yes to every opportunity—it’s what has gotten me to where I am today.”