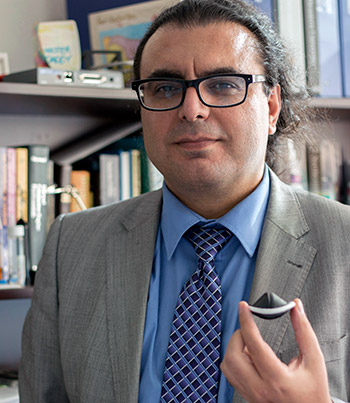 Researchers from UBC’s Okanagan campus have developed a new and advanced mechanical heart valve that could have a major impact on the way cardiovascular surgeries are performed.

When UBC Okanagan biomedical engineering professor Hadi Mohammadi thinks about revolutionizing cardiovascular biomechanics, he looks at it as a chess match.

“The complexity of the heart mirrors the complexity of chess, ” Mohammadi says. “For many years, few innovative approaches have taken place in either realm. But we think with our new synthetic heart valve, we may have just addressed one such complexity with a real solution.”

According to Mohammadi, about half of synthetic heart valve replacements are bioprosthetic and half are mechanical, each with their own limitations. Mechanical valves have traditionally had excellent lifespans but had difficulty managing blood flow; whereas bioprosthetic valves have had the opposite problem. Mohammadi says his valve offers the best of both worlds.

“This new valve design addresses some of the shortcomings of the existing solutions by providing more circulation through the heart by virtue of its innovative design.”

Mohammadi thinks his new heart valve will be a game changer for surgeons and patients alike. And he’s not alone.

Dr. Guy Fradet is the head of cardiovascular surgery at Kelowna General Hospital and a partner on the research. Fradet says the new valve has the potential to replace two existing valve designs that have been used since 1977 and 1994, respectively.

While significant additional development and testing is required before the valve will be available to doctors, both Mohammadi and Fradet are excited about the next steps.

“If our designs and hypothesis hold up to further testing, this new valve design could replace all existing heart valves, both mechanical and bioprosthetic,” says Mohammadi. “It could revolutionize cardiovascular surgery.”