The UBC Okanagan community gathered on November 9 for its 12th annual Remembrance Day service. Students, faculty and staff came together in the central courtyard and heard from a number of speakers before observing two minutes of silence.

Lt.-Col. Mike McGinty, commander of the British Columbia Dragoons, a military veteran and associate director of risk management and security services at UBC Okanagan was among those to give remarks.

The following is a transcript of his speech. 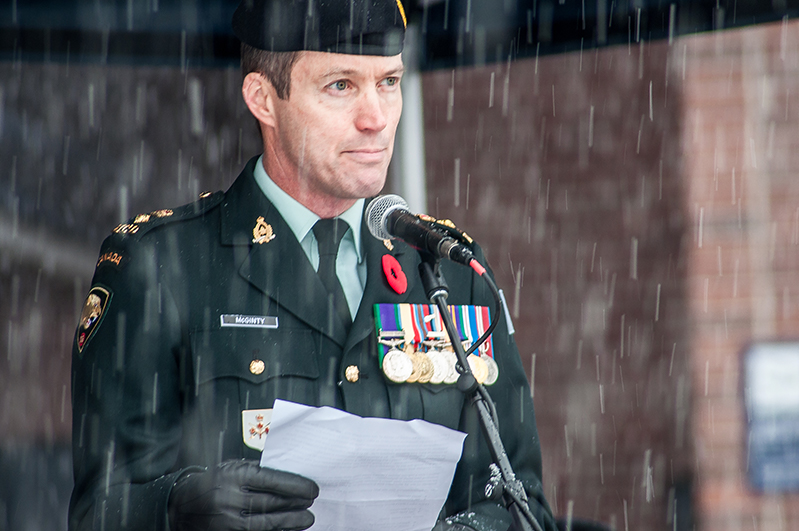 “I was privileged to be asked to speak at this ceremony one year ago. On that day, as befitting such an illustrious institution as UBC, I did my best to explain the importance of remembrance in intellectual and institutional terms by identifying the importance of freedom of expression to the academic debate and emphasising how the sacrifices made in conflicts past and present enabled that. This year, I thought instead that I would take an entirely different approach.

As a veteran, I am sometimes asked what I think about on Remembrance Day. Today I will take a much more emotional and personal approach to remembrance. I will tell you who I remember and why. In so doing, I hope to bring the act of remembrance from the abstract and statistical to something more tangible and closer to home.

When I was a regular soldier I served more than 1,000 days on combat operations, including two tours in Afghanistan. I also commanded the rear party for a Brigade of 8,000 paratroopers while they spent six months deployed. In the process, I attended the funerals of the 33 who were killed and I met all of their families.

So, on Remembrance Day, the first people I think of are those who I knew personally.

Warrant Officer Class2 Vince Hussell, an aircraft commander in my squadron who was killed in the summer of 2008. At his funeral his 15-year-old son, Tom gave an unwavering eulogy. He went on to join the Army and serve in the same regiment as had his father and I.

Sgt. Osborne Ozzy was in the same flight as me and the aircraft commander of a Lynx helicopter which crashed in the sea off Bosnia in 1993. He was one of only two who made it to the surface but, driven by his responsibility to the rest of his crew, dived back down to rescue others. The aircraft sank and he was pulled down and drowned.

I think of those who I didn’t know personally but whose families and stories I came to know.

Lance-Corporal Bateman, 2nd Battalion, The Parachute Regiment, killed in action Helmand Province summer 2008. When LCpl Bateman’s body was repatriated it was accompanied by his brother, a Royal Marine also serving in theatre at the same time. He was home only for a week for the funeral and then returned to Afghanistan to complete his tour.

Sgt. Mathews, Royal Regiment of Scotland, killed in action Helmand Province summer 2008. At his funeral Sgt Bateman’s coffin was carried by his father, a retired warrant officer in the same regiment; his father-in-law, a retired quartermaster captain in the same regiment; his brother, a serving sergeant in a sister regiment; and his 17-year-old son, a recruit in training in a sister regiment. His son was offered the opportunity to withdraw from training as a result of his father’s death. He declined to do so and subsequently went to Afghanistan when old enough.

Those who I never knew personally but whose stories I was involved with.

I remember that on two consecutive days in October of 2010 we lifted two 19-year-old US Marines from 3rd Battalion, 5 Marine Regiment in Sangin in the upper Helmand valley. Both were quadruple amputees.

I was in the cockpit of an Apache helicopter over Nowzad in Helmand province in the summer of 2006. We were escorting a Chinook on a casualty evacuation mission. Friendly troops were in heavy contact. A soldier had been shot and seriously wounded; a ‘T1’ casualty meaning he needed to be evacuated and in surgery in less than 60 minutes. As we arrived a jet was overhead, 105mm artillery was firing to suppress enemy positions and the friendly troops were themselves firing 81mm mortars and small arms to attempt to disengage. My wingman and I immediately began to identify and engage targets. The Chinook landed right in the middle of all this and the casualty was loaded in less than 30 seconds. It lifted and turned immediately for home without wasting any time in climbing to a safer height. We also turned for home to escort them back, with a small feeling of professional pride at a job well done. Without warning the Chinook then climbed for a safer altitude and the radio spoke: ‘ T1 now T4, cancel hospital HLS’. The casualty had died on the casevac aircraft. And I remember two thoughts.

The first thought was that because so many people were working so hard and we had done everything right, he just couldn’t die. But just like life, only with greater extremes, war is not fair.

The second thought was the burden of knowing. Knowing that at that moment, back at home, it was breakfast time. That a dad was getting in the car for work, a mum making her breakfast. None of them knew the terrible news that their world had just ended.

War is a terrible business. But so is life without the rights and freedoms that we as Canadians are so privileged to enjoy. Protecting those rights and freedoms, not just for ourselves but also in trying to allow others to benefit from them, does not come for free. The costs were borne, are borne, will be borne in thousands of stories of personal tragedy for individuals and families like those I have told you today, whose lives are ended or forever blighted. Those tragedies are the true cost and meaning of the sacrifice which we honour in our act of Remembrance today.”