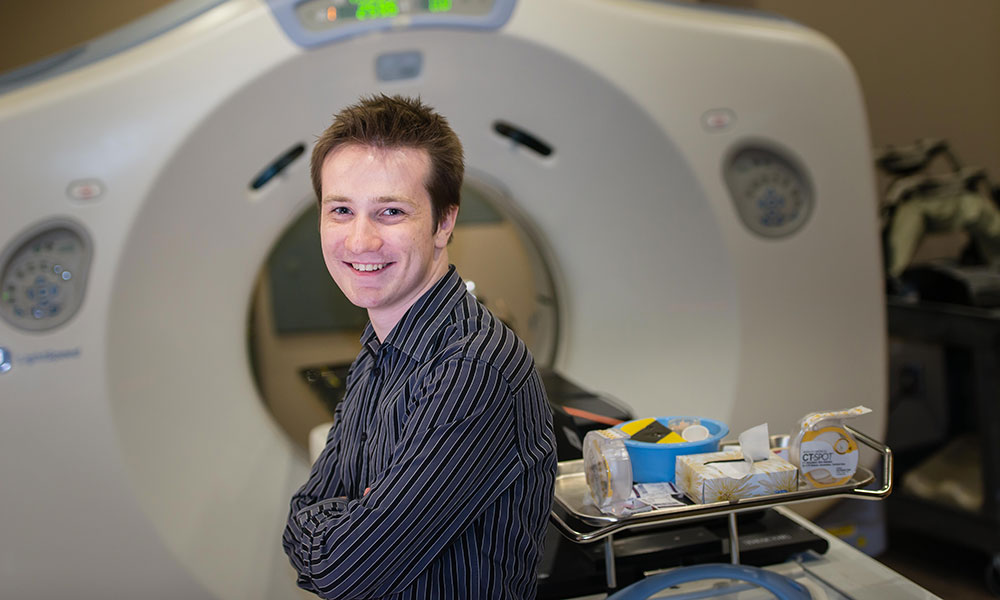 PHYSICS IS ABOUT RELATIONSHIPS, from the interaction of atoms to the forces between intergalactic bodies.

UBC Okanagan graduate student Andrew Ogilvy has his own special relationship with this discipline. It began in high school with the help of his physics teacher, Darryl Barber.

Find out more about our Master in Medical Physics program

According to his students at Seaquam Secondary School in Delta, BC, Barber is tough, intense and playful, bringing a fun spark to his classes. A 30-year veteran of teaching, Barber is a secular Buddhist who applies the philosophy of “being present” during his teaching. For him, physics is the Big Truth, which constantly questions itself with limitless possibilities.

Something in this freeform thinking awoke Ogilvy’s passion for physics. Until then, he was the average student checking all the boxes before graduation.

“It wasn’t until Grade 12 that things started clicking for me,” Ogilvy says. “A switch went off while taking Mr. Barber’s class and I started enjoying his physics class. Mr. Barber won me over, and since then I’ve been captivated.”

“Ben Tippett is a great guy,” Ogilvy says. “His lectures are almost as hilarious as his Twitter account. I always looked forward to his lectures.”

The Seaquam alumni agree that Barber’s ways were unorthodox yet his lessons and inspiration continue to resonate.

Ogilvy came to UBC Okanagan after high school and started his physics major in second year.

“Physics explains everything,” he says, describing his ongoing fascination with the field.

Similar to Barber and Tippett, Ogilvy enjoys the fundamental nature and broad applications of physics—from computing to sustainable energy production. “Physics is in almost everything we do.”

The one downside for Ogilvy is that mathematical applications are the language of physics. “I hate math,” he says, acknowledging his Achilles heel. “It’s a struggle but once I’ve grasped a concept I’m good at it.”

Perseverance and hard work have won the day for Ogilvy, who equates math with the tools of a craftsman: “A carpenter doesn’t have to love his gear to be an expert.”

Ogilvy was fortunate to hone his craft via physics professor Andrew Jirasek, in whose lab he initially worked as an undergraduate student. He first helped relocate Jirasek’s research and equipment from the University of Victoria.

While others enjoyed the Okanagan beaches and UV summer rays, Ogilvy spent his summers studying another form of radiation. His tasks in Jirasek’s lab were to set up and calibrate some of the equipment used in cancer radiation therapy.

TARGETING RADIATION IN THE BODY

Approximately 50 per cent of cancer patients will receive radiation treatment (alone or in combination with other therapy) in an attempt to kill their cancer cells or shrink tumours, says Jirasek. Targeting a high dose of radiation to a specific tumour or area in the body is not trivial. Nor is assessing the outcome of this treatment. This is where medical physics research plays a vital role.

“Let’s take for example a cancerous mass in the lung,” Ogilvy says. “Oncologists worry about ensuring the radiation only hits the tumour and confirming that the dose is accurate.” He explains that targeting radiation in the body is complicated, in part because different organs and tissues have varying densities.

Devising models to assess the effect of radiation on tumours is a focus of Jirasek’s research, one which also inspires Ogilvy. Following completion of his undergraduate degree, Ogilvy enrolled in the inaugural year of Master of Medical Physics, a new UBC Okanagan program.

Under the supervision of Jirasek, Ogilvy evaluates the capacity of a translucent gel to gauge radiation dosage. When the ionizing radiation hits the gel, its opacity changes, which can then be quantified. He explains, the ultimate goal is to provide improved radiation targeting for specific tissues and organs.

“This is complicated work,” he says, while admitting he’s still amazed to be a masters student.

Although the first year of the Medical Physics program was tough, involving substantial coursework, Ogilvy is better able to enjoy his second year. He now has more time for research and socializing.

He’s an avid skier and enjoys time with friends but admits these both require more effort than they previously did—balancing work with other activities is challenging.

Ogilvy is not sure what lies ahead. Working within the health-care sector is one option, while the field is competitive and job opportunities are limited. But he remains optimistic.

“Physics isn’t a bad career starting point. If I don’t get a job directly in my field, I’m sure this degree will help.

“Perhaps employers will see it and think, This guy is pretty smart.”