UBC study suggests antioxidants may not help with altitude sickness

A new UBC study is using a high-altitude expedition to better understand how reduced oxygen levels affect the brain and whether antioxidant supplements—commonly sold and marketed as a remedy for altitude sickness—are effective.

In November 2016, a team of researchers from UBC’s Okanagan campus travelled to the Everest base camp to conduct a number of experiments. Led by School of Health and Exercise Sciences graduate students Alex Hansen and Ryan Hoiland and supervised by Prof. Phil Ainslie, the tests took place at two locations and at different altitudes—sea level and the Everest Pyramid Research Station located at 5,000 metres.

The brain is a highly oxygen-dependent and fragile organ that requires a constant supply of blood to meet its metabolic demands, explains Hansen, a Master’s of Science alumni. High-altitude exploration is a commonly used technique understand how the human body adapts to reduced oxygen levels.

“There has been very little work completed within this area of research, which is surprising due to the increasing habitation of high-altitude locations,” says Hansen. “Our recent study uses the most advanced techniques, while exploring brain function at altitude.”

Hoiland, who was recently named UBC Okanagan’s PhD Student Researcher of the Year, says that using the data collected from this most recent trip to Nepal, they have determined that an acute dose of antioxidants does not alter the function of blood vessels in the brain and therefore does not alleviate altitude sickness.

“This is the first study to consider the effects of using common over-the-counter antioxidant supplements on the function of blood vessels in our brain during reduced oxygen levels,” says Hoiland.

The sea level tests involved 12 healthy volunteers who were given either a placebo or antioxidant dose of vitamin C, vitamin E, and alpha lipoic acid. Just 30 minutes later they were given a second similar dose. Hansen notes all participants were given dietary restrictions so they could avoid foods high in antioxidants and nitrates.

The second test took place at the Everest Pyramid Research Station and involved nine healthy participants who had been at high altitude for 12 days, but had lived close to sea level for at least six months before the study. Hoiland explains they did not enforce dietary restrictions on these people, due to the lack of control during the ascent and stay at the pyramid research centre.

Again, participants were given either a placebo or antioxidants (vitamin C, E, alpha-lipoic acid). Statistical analysis for both sea level and high-altitude tests were performed with the researchers watching levels of oxygen and carbon dioxide in the blood during tests.

Researchers also examined how these antioxidants affect blood and oxygen supply to the brain in response to short-term high-altitude simulations, as well as trekking and living at higher altitudes.

“There is a large focus on antioxidants and blood vessel function in these clinical populations and we are excited to move forward in our research with this new information,” he adds.

This research, supported by NSERC and a Canadian Research Chair, was recently published in the Experimental Physiology journal. 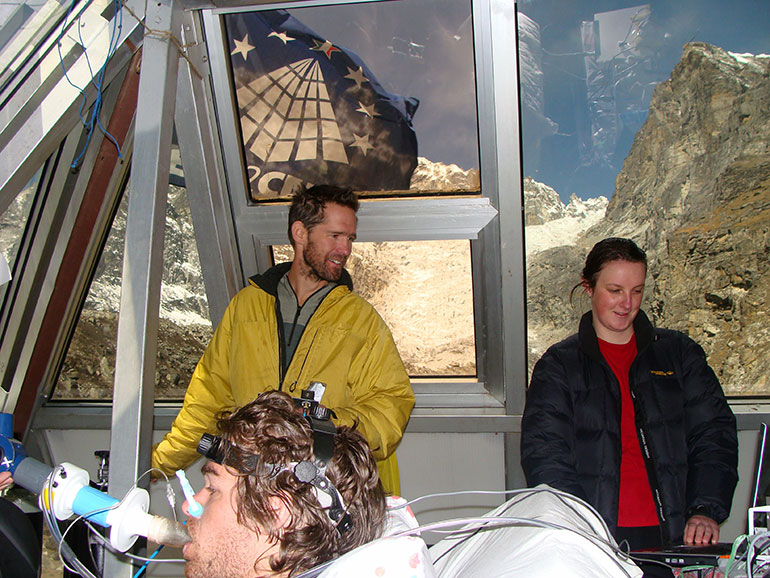