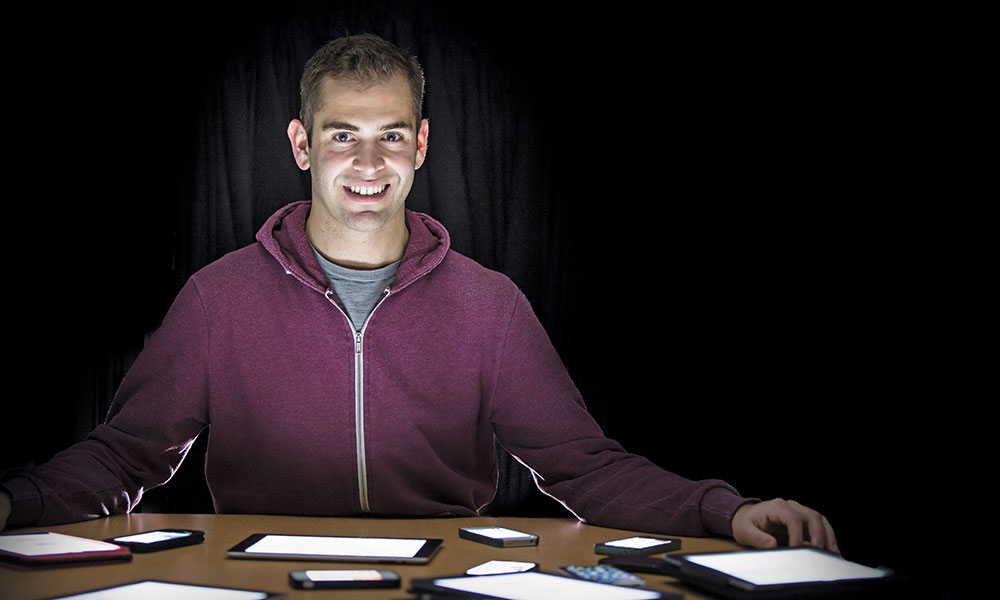 “You have to change the system from within. Things like helping small communities find their voice or preserve their voice—that’s what motivates me.”

IN THE PROCESS of helping grassroots movements find their voice, David Lacho also found his own.

As a linguistic anthropologist immersed in research, Lacho has worked to reclaim Indigenous placenames of the land, investigate the unique francophone Madelinot culture, translate a sapient humanoid language from French into English, and plunge into modern technology.

Fresh off of earning a Bachelor of Arts in 2015, Lacho went on a working holiday to teach English to junior- and high-school students in Marseille, France, where he also taught himself how to code.

Upon his return to the Okanagan, he began collaborating with community members of the Splatsin First Nation, the southernmost band of the Secwepemc Nation. Their language, Secwepemctsín, is endangered. Less than one per cent of over 800 band members speak Secwepemctsín and many who do are approaching 90 years old. So Lacho brought his diverse UBC education and knack for language revitalization and technology to the community.

Today Lacho works with the Splatsin Tsm7aksaltn (Splatsin Teaching Centre), where he collaboratively developed an augmented reality app with the community and its elders for language and learning revitalization. The idea evolved from their collaboration and iterative process. “That’s the whole point of it,” he says. “Being directed by community members.”

Jokingly self-described as a kind of “language IT guy,” Lacho is also the recent recipient of UBC Okanagan’s 2018 Master Student Researcher of the Year.

Among other awards, he was one of only 10 Canadian Master’s scholars in 2016 to receive the Canada Graduate Scholarships to Honour Nelson Mandela, awarded by the Social Sciences and Humanities Research Council. And, in 2017, Lacho went to do more fieldwork-this time in Papua New Guinea with funds from UBC’s Sharron Simpson Family Community Impact Award, the Irving K. Barber School of Arts and Sciences International Education Travel Subsidy, and funds from the National Science Foundation.

From his many travels, Lacho has learned a few things.

“There’s something I didn’t understand before I began,” he says. “You’re always connected to your research in some way. You embody it. It becomes a part of you. And it becomes something you can’t just leave behind, especially when you’re doing research in the social sciences.”

Lacho began his academic journey at UBC’s Okanagan campus through the Irving K. Barber School of Arts and Sciences. As a double major in Anthropology and French, his primary area of research was at the intersection of language and culture, with a strong focus on using social media for dialect preservation and promotion.

With funding in the field from the MÎM research project (Mer du changement: une étude des Îles de la Madeleine), and the Irving K. Barber School of Arts and Sciences Undergraduate Research Award, Lacho spent six weeks in Quebec. Here, he researched how French speakers on the Magdalen Islands, a small archipelago in the Gulf of St. Lawrence, identified with their dialect both linguistically and socially, and how they viewed their dialect in relation to other forms of French. The regional municipality of the Magdalen Islands—Îles-de-la-Madeleine—has several dialects of French despite being only 205 square kilometres.

“The dialects of French spoken in the Magdalen Islands are endangered,” he says, “and their potential loss parallels the potential loss of cultural knowledge.”

Following six weeks of fieldwork, in which he worked extensively with the community conducting participant observation and doing interviews, Lacho developed a website to promote and maintain the diverse Madelinot dialects.

The site includes embedded audio clips and other resources. It also operates like a social-media platform to illustrate how the dialects are intertwined with the community’s sense of identity, pride, and culture. Lacho created YouTube clips and a Facebook page to showcase and share “Le Parler Madelinot [The Local Speech]: a language as colourful as the island houses.” The Twitter handle – #leparlermadelinot —has garnered 300 followers and kept the Madelinot conversation going.

“Not only is there an emotional attachment to your research,” Lacho says, “but you also carry a deep responsibility to the people who shared their stories and knowledge. You make friends. They become a part of you, and you feel an obligation to uphold your promise of change or action that was embodied within your research.

“My research suggested that many people considered their dialect to be inferior to Québécois. This influenced, on some levels, the community’s ability to have a strong voice in the rapid government planning and policy currently affecting the area.”

Assistant Professor Christine Schreyer, an anthropology and linguistics specialist, says Lacho excels at research and is committed to making it have real-world applications. She lauds his work for helping to draw attention to the unique dialects of French, and bringing awareness to the language and dialect diversity in Canada.

“In particular,” Schreyer says, “David’s research has helped individuals in the Magdalen Islands feel more pride in their dialect and has encouraged conversations on the dialects, including finding forgotten phrases and terms in Magdalen French, through the use of social media.”

SPEAKING UP FOR FRINGE CULTURES

Lacho didn’t come to UBC’s Okanagan campus knowing he was going to become passionate about linguistic anthropology and the positive change it can bring to community. Fresh out of a year at culinary school in Winnipeg, he moved in 2010 to Kelowna with designs on living the cultural and recreational B.C. lifestyle.

His first year of university at the Okanagan campus was about exploration—until he ended up in a linguistic anthropology class taught by Schreyer, his soon-to-be mentor. After that class, he was hooked on the close integration between language and culture.

Since March of 2012, Lacho has been involved in four different research projects with Dr. Schreyer, the UBC linguist renowned for creating the Kryptonian language for the Hollywood film Superman: Man of Steel.

First, Lacho helped translate results from Schreyer’s research study about Na’vi—the language created for the blockbuster movie Avatar—from French into English. The next fall, Schreyer hired Lacho as her research assistant on the project “Learning to Talk to the Land: (Re)claiming Taku River Tlingit Placenames,” a community-based mapping project using the GeoLive tool.

“David’s interest and passion in how social media and online technologies can help revitalize endangered languages has made him an invaluable member of our research team,” Schreyer says.

“He approaches his work on this project with great enthusiasm, and he has been involved with the design of the Taku River Tlingit Placenames website since the beginning. He constantly problem-solves design issues, edits and uploads information including audio files and photos, and has been involved with adapting community feedback from the Taku River Tlingit First Nation.”

Most recently, Lacho worked on a research project about the linguistic landscape of Bernard Avenue in downtown Kelowna. “Finding Meaning in Languages” looks to understand how different Kelowna residents notice and understand languages in the city, such as Sylix, the language of the Okanagan First Nations.

Find out more about our Anthropology program

Lacho credits his passion for knowledge and personal transformation to his parents. His mom is an elementary school teacher with Acadian roots who communicates almost exclusively in French with her son, who became fluent early on. “Everything she knows she shares,” Lacho says. “Knowledge isn’t supposed to be kept in a treasure box.”

“I don’t focus on the macro level,” he says. “I’m a micro-level person and believe it’s grassroots movements that change the world. You have to change the system from within. Things like helping small communities find their voice, or preserve their voice, or use their voice—that’s what motivates me.”

Part of his drive comes from the realization that one person can truly make a difference.

“It’s exciting to think you can empower people, and get them excited and motivated and involved in making a positive impact. And anyone can do it.

“I hope that in some way, by following my passion for helping others achieve their goals, I’m able to do my part in bringing about positive global change.”

THE UNIVERSITY OF LIFE

“University has taught me how to think critically and reflectively about my actions in all aspects of my life—personal, academic, career,” says David Lacho, mere months away from graduating with a BA from UBC’s Irving K. Barber School of Arts and Sciences. 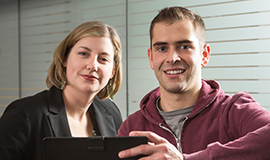 “University as an institution is such an amazing concept: People come together and ideas grow and evolve. Ideas are dynamic, always changing.”

When Lacho first arrived at UBC, he says it was to buckle down for a career, before coming to the realization that he could change his perspective on what it means to be in university. He soon learned that any student, any person, can spark change just by taking action.

“It sounds so cliché, but my university experience transformed me into a better global citizen.”

Mentored by Dr. Christine Schreyer, Lacho says he’s had tenure-track professors and sessional instructors alike who have “just blown my mind” during his studies at UBC’s Okanagan campus.

“We have amazing faculty and support staff here,” he says. “There are incredible people. My whole degree wouldn’t be what it is now, my experiences would have never turned out the way they did. The people here at UBC Okanagan are really what make this place so special.”