Story of resilience and recovery shared at annual breakfast 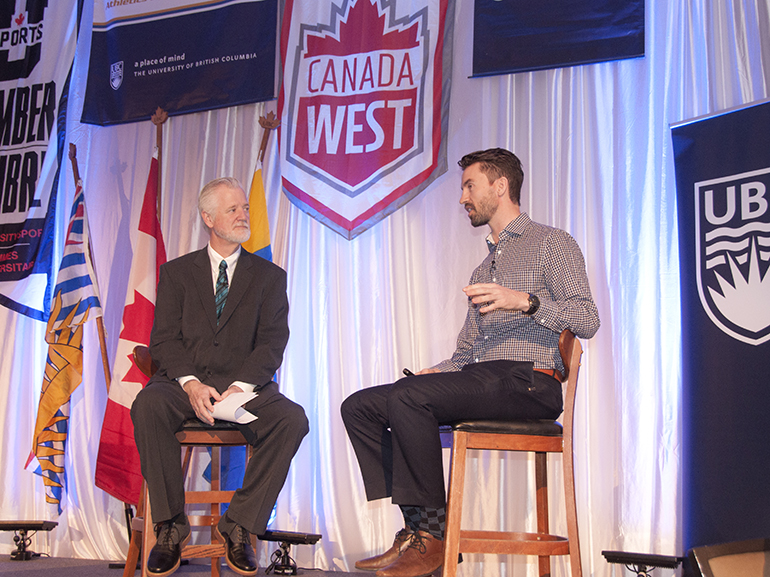 Shaw, a UBC alumnus who lives in Lake Country, broke his neck in a ski accident in December 2013. As a special guest at the 13thannual Valley First/UBC Okanagan Athletics Scholarship Breakfast, Shaw showed a video of the accident and shared the story of his recovery including his first steps, his first time in a sit-ski and finally heli-skiing.

“When I fell, I knew it was game over. My biggest fear—actually my mother’s biggest fear—had just come true,” Shaw told the packed room of more than 300 attendees. “It was devastating. I had been a skier all my life. It was like my identity had been taken away from me.”

There was a bit of luck when it came to the break in his neck, however, and Shaw recalled how doctors gave him a chance of recovery. After several surgeries, weeks and months of physio—all documented on video and shown at the breakfast—Shaw took his first wobbly steps. It was long, painful and difficult recovery, he explained. He had one message to share with the audience; it was all about using his ‘athlete mentality’and not being afraid to ‘fail as every step he took was a step forward.’

“Fail forward. I would say to everybody in this room, don’t ever give up. Athlete or not everybody has the ability to fail forward. My recovery is simply a story of hope, trust, resilience and certainly gratitude,” he said. “Getting into that sit-ski for the first time was more powerful than skiing as an able-bodied person. And simple things…like brushing my teeth….I cried the first time I brushed my teeth.”

The giving didn’t stop there. Long-time supporters Lois and Cliff Serwa presented a gift of $150,000 to the Okanagan campus. The funds will support a new basketball scholarship and a reading room in the new Teaching and Learning Centre will bear the Serwa family name.

While the purpose of the event is to raise funds for athletic scholarships, it was also a chance to recognize and congratulate the accomplishments of the Heat athletes. It was another stellar season for the Heat. The women’s volleyball team, for the fifth year in a row, advanced to the semi-final round in Canada West playoffs and enjoyed their second trip to the national championship. Meanwhile, the men’s golf team captured its first-ever national silver medal, collecting a provincial silver on their way to the finals in October.

Soccer’s Mitch McCaw set a new Canada West record with 685 consecutive minutes without surrendering a goal. He was also the Canada West star for three straight weeks during this run. And cross-country runner Veronika Fagan was the fastest in Canada winning the national championship race and bringing home a national individual medal. She was also named Heat’s most outstanding female player of the year.

Fagan, a third-year nursing student who grew up in Kelowna, used the podium at the Athletics breakfast to thank the School of Nursing for its flexibility and support while she competed, and also thanked the community for contributing to the scholarship endowment.

“Your contributions will go a long way and eventually allow for the growth of previously overlooked sports, such as cross-country running. My goal is to help grow the UBC Okanagan cross country program into a university team which will compete with the best runners in U Sports by attracting passionate runners from elsewhere in Canada,” Fagan said. “Each and every time that I have had the privilege to wear the Heat singlet has been one to remember and I thank UBC Okanagan and its supporters for that.”

UBC Okanagan’s Deputy Vice-Chancellor and Principal Deborah Buszard also took the time to thank the community for its continued support.

“The Valley First/UBC Okanagan Athletics Scholarship Breakfast is an annual opportunity to support student-athletes and celebrate excellence in sport,” says Deborah Buszard, Deputy Vice-Chancellor and Principal of UBC’s Okanagan campus. “UBC matches every dollar raised at the event and I’m delighted to see that, together, we have raised more than $850,000 for the scholarship fund. The community support for UBC Okanagan students is truly inspiring.”

The breakfast was also an opportunity to introduce UBC Okanagan’s new director of Athletics and Recreation Tom Huisman. Currently manager of Interuniversity Sport Program at Carleton University, Huisman begins his new role May 1.