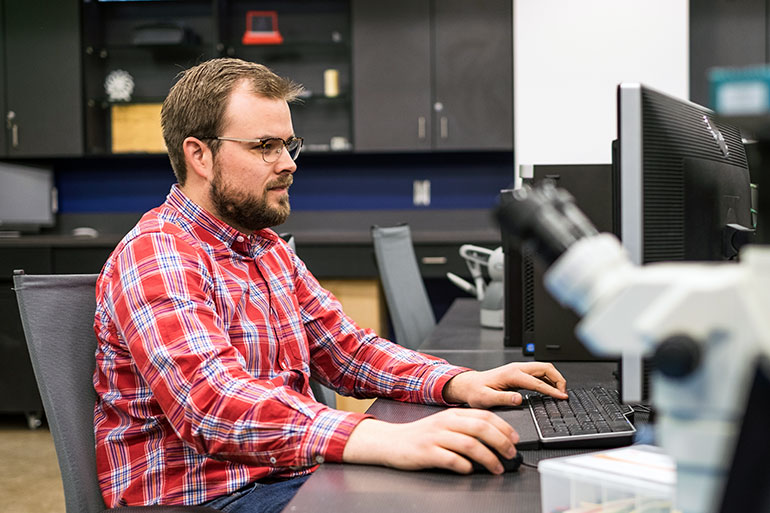 Researchers at UBC’s Okanagan campus are using advanced computer simulations to model how air flows into the deepest regions of the lungs and uncover how the early stages of emphysema can impact a patient’s ability to take in oxygen.

The results are significant because clinical studies suggest that identifying emphysema early can significantly improve patient outcomes. Understanding the early stages of the disease will also go a long way towards developing improved surgical or drug treatments.

“Advanced computer modeling has been used for years in areas like commercial aviation or even to predict the weather,” explains Joshua Brinkerhoff, assistant professor in the School of Engineering at UBC Okanagan. “Now, rather than modeling how air swirls in a hurricane, we’re using similar techniques to predict how air moves in human lungs.”

Brinkeroff says this research—which was done in collaboration with colleagues at McMaster University and the Centre for Heart and Lung Innovation at Vancouver’s St. Paul’s Hospital—is still in its infancy but he’s optimistic that it could lead to a better understanding of the development of emphysema and other lung diseases.

As emphysema in a patient advances, the tissues supporting air sacs inside the lung become damaged, making it harder for patients to exhale. In addition, the tissues between alveoli are gradually destroyed, meaning there are fewer sites for oxygen to be absorbed and patients feel short of breath.

“Prior to this study, we knew that emphysema involved these two mechanisms,” says Dragos Vasilescu, a researcher at the Centre for Heart and Lung Innovation and co-author of the paper. “What we didn’t understand is which is more important in the beginning stages of the disease. These computer simulations help fill in those gaps.”

But according to Brinkerhoff, they’ve only begun to scratch the surface.

“We’ve made the first step of determining a benchmark for airflow in one section of the lungs and the next step will be to create a more detailed analysis of airflow throughout the rest of the lungs. There’s still a great deal that these models can teach and hopefully those insights will one day help patients breathe a sigh of relief.”

The research was published in the Journal of Biomechanical Engineering with financial support from the Natural Sciences and Engineering Research Council of Canada  (NSERC).