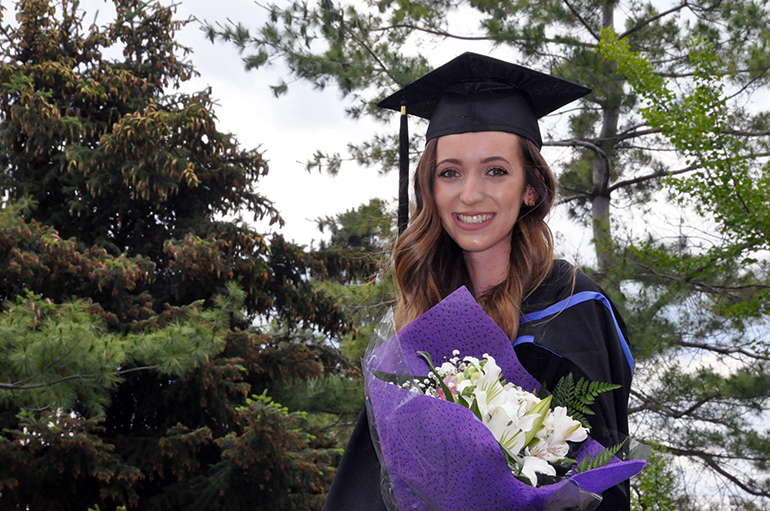 Dana Klamut graduated this week with degrees in math and computer science (honours) from UBC Okanagan.

Winner excels at both math and honours computer science

Things have been adding up for Dana Klamut since she began her academic career at UBC’s Okanagan campus five years ago.

Now in its ninth year, the $10,000 prize recognizes a top graduating student who has excelled academically and has shown leadership while earning their degree.

“Pushor Mitchell is proud to be a supporter of UBC Okanagan and the Gold Medal Leadership Prize, and continues to promote the outstanding efforts of students,” says Managing Partner James Paterson. “We think that the selection of Dana Klamut is an excellent choice as winner. Her achievements epitomize academic excellence and support gender diversity. Her accomplishments are many and we are proud to be able to add her to our distinguished list of Pushor Mitchell LLP Gold Medal Prize winners.”

With a grade point average of 96 per cent, a number of academic accomplishments and a long list of volunteer hours, Computer Science Professor Yves Lucet says Klamut was a shoe-in for the award.

“She is clearly a top academic performer who takes her passion about the promotion of women in science to heart,” says Lucet.

In 2015, she helped organize the first-ever Canadian Undergraduate Computer Science Conference, and Lucet says her participation in the event was more than impressive. Along with planning the event, she recruited sponsors, promoted female participation, organized a panel on women in science while also participating in the event.

“Organizing a conference is very challenging, creating a whole conference series is unheard of for undergraduate students,” adds Lucet. “I honestly did not think undergraduate students could pull this off. I attended the conference and I can attest that the speakers were world-class. It left me speechless and the impact on attendees was deep and long-lasting, leading to a highly active course union. This is Leadership with a capital L.”

Ramon Lawrence, associate professor of computer science, taught Klamut in three different courses and he says she is one of the highest performing female students in computer science in the last 10 years. In 2016, she received an undergraduate student research award to study embedded database systems with Lawrence’s research group.

“Despite being the most junior member in the research group, by the end of the summer she made significant contributions which led to a refereed publication,” Lawrence says. “She is both a great role model for women in computer science and a proponent of increased diversity and female participation in the field.”

Klamut has plans to stay in the Okanagan and begin a career in the computer science industry. But she hasn’t ruled out graduate studies, saying she has become passionate about research throughout her undergraduate career and the award will provide that opportunity when that time is right.

“I am truly honoured to be this year’s recipient of the Pushor Mitchell LLP Gold Medal Leadership Prize and to be recognized in association with one of Kelowna’s most prestigious law firms,” says Klamut. “I am also grateful for the personal and academic growth that I have experienced during my time at UBC Okanagan due to the support and encouragement of my amazing professors and peers.”