Hargreaves teaches English in the Faculty of Creative and Critical Studies (FCCS) and specializes in Indigenous literary and cultural education.

Her book, Violence Against Indigenous Women: Literature, Activism, Resistance, was published by Wilfrid Laurier University Press in August of 2017 and was named the winning entry two weeks ago. 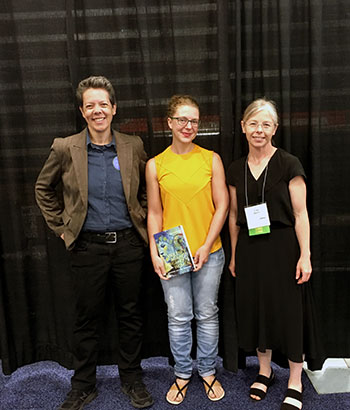 “Although still on the early side of her career, Allison Hargreaves is already recognized as one of the leading voices in a Canadian literary and cultural studies practice that brings the voices of indigenous women into conversation with a decolonizing settler perspective,” says FCCS Dean Bryce Traister. “The Gabrielle Roy prize cements her already stellar reputation, and the Faculty of Creative and Critical Studies at UBC’s Okanagan campus couldn’t be more proud of her achievement.”

Violence Against Indigenous Women argues for the important role that literature and storytelling can play in response to gendered colonial violence. Indigenous communities have long been organizing against violence, but the cases of missing and murdered women have only recently garnered broad public attention. The book joins the conversation by analyzing the socially interventionist work of Indigenous women poets, playwrights, filmmakers and fiction-writers. Organized as a series of case studies that pair literary interventions with recent sites of activism and policy-critique, the book puts literature in dialogue with anti-violence debate to illuminate new pathways toward action.

“I am honoured by the recognition, and grateful for the attention this may bring to the issues discussed in the book,” says Hargreaves.

She also drew attention to local events, particularly the Annual Memorial Vigil for Missing and Murdered Indigenous Women, Two-Spirit, and Girls held annually in Kelowna every February 14. She is donating her prize money toward next year’s event, she adds.

“I want to acknowledge my fellow organizers, and especially Tina Miller, for their inspiring commitment to local commemoration and action.”

The Gabrielle Roy Prize is awarded annually for the best book-length study in Canadian and Quebec literary criticism.

“This is a compelling collection of timely essays and case studies on Indigenous women’s literature in Canada. Hargreaves’ introduction provides a detailed and insightful commentary on the issues surrounding the history and importance of resistance narratives,” stated the jury when announcing the award. “It is carefully researched, sensitively argued, memorable and deeply insightful.”

For more information on the award visit: wlu.ca/news/news-releases/2018/may/wlu-press-author-allison-hargreaves-wins-gabrielle-roy-prize