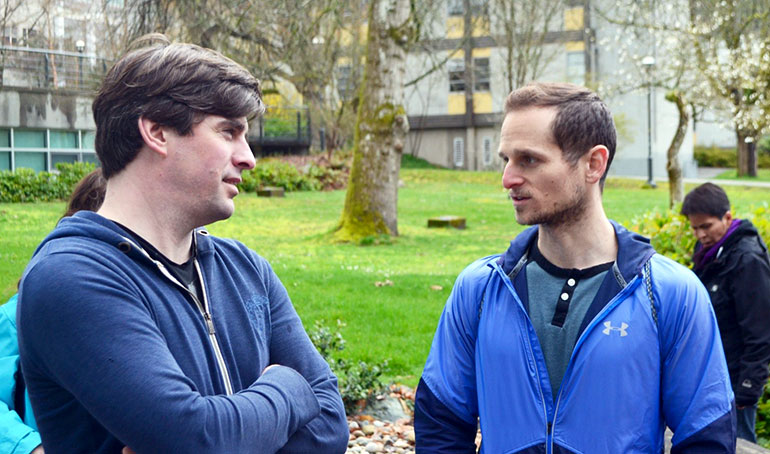 UBC Okanagan students Stefan Bigsby, right, and Jackson Traplin debrief after their tour of the UBC Vancouver campus. Both were part of the cohort of UBC Okanagan students and staff who attended the opening of the Indian Residential School History & Dialogue Centre this spring.

For many undergraduate students, university is a time of discovery and reflection

For Stefan Bigsby, starting a second degree at UBC’s Okanagan campus meant returning to his alma mater with a new awareness of his Métis heritage that he connected with two years ago. A 2011 graduate of the Faculty of Health and Social Development’s Human Kinetics program, Bigsby made the decision to shift career paths and return to university to pursue a Bachelor of Science in Nursing degree.

“It was the exploration of nursing as a profession that solidified my decision,” explains Bigsby. “The foundations of nursing — compassion, empathy, health promotion, and physiology — won me over. Finally, I had found a profession that met both my strengths and passions.”

There is little research examining what hinders or motivates university graduates to pursue an additional Bachelor’s degree, but some obvious conclusions can be drawn. Financial considerations must be made as careers are put on hold. There is also that precious resource known as time. Although Bigsby has a full undergraduate health-related degree, the four-year structure of the Nursing program at UBC Okanagan meant starting over as a first-year student. This decision did not come lightly to Bigsby, who had some initial hesitation as he considered the stigma of men in nursing practice.

When he made his final decision, Bigsby applied only to UBC Okanagan, motivated by a desire to remain in the valley he calls home.

“Not only is the program highly competitive and respected, this is where I want my future career to exist and the ability to begin building my professional network.”

Bigsby arrived on campus last September with the desire for a different university experience than during his previous post-secondary career. His first degree was focused on learning how to balance the demands of coursework with personal wellbeing and commitments. Already versed in time management, study skills and self-advocacy, now Bigsby intends to make this second degree about engaging with his Métis heritage and learning from community and peers about Aboriginal cultures and perspectives.

“This connection to Aboriginal culture has facilitated a great deal of personal growth and exploration,” observes Bigsby, after much critical self-reflection and awareness.

A recent scholarship application which he was applying for posed the question: what does Reconciliation mean to you?

Answering this meant reflecting on and addressing the gaps in his own knowledge of the colonization of Indigenous lands, languages and cultures in Canada.

“I felt discouraged that I could not answer this question effectively without having to do research and even more personal reflection,” acknowledges Bigsby. “I was disappointed by my lack of knowledge about the history that necessitated the need for a Truth and Reconciliation Commission. Even more frustrating was my lack of knowledge with respect to Indian Residential School history.”

When the opportunity arose for UBC Okanagan students to participate in a trip organized by Aboriginal Programs & Services to attend the opening of UBC’s Indian Residential School History and Dialogue Centre in Vancouver on April 9, Bigsby expressed a sincere interest in attending. For him, it was a step towards broadening his understanding of what it meant to be an Aboriginal Canadian and to develop his own perspective. Along with his peers, he immersed himself in various cultural learning opportunities, visiting UBC’s Museum of Anthropology and partaking in an educational tour of the UBC Longhouse and workshop hosted by Debra Martel, associate director of the First Nation’s House of Learning (Longhouse).

Learning the difference between a house post and pole, and the different protocols around the giving and receiving of such gifts, helped him to understand the multiple expressions of culture among Aboriginal nations. The highlight of the trip for Bigsby was hearing President Ono give his apology to all persons impacted by the Indian Residential School system, and the response of survivors.

“It gave me a feeling of respect for him as the president of a university that has a lot of work to do in its own atrocities towards the colonization of Indigenous lands and knowledge. I’ve realized that the work, effort and need to rebuild and work towards reconciliation is far from over. If it ever can be.”

Reflecting on this experience and the years ahead, Bigsby is eager to learn more about Indigenous experiences in Canada. “I want to develop my capacity as an Aboriginal student nurse. I have a desire to develop my relational and cultural sensitivity towards communities and those affected by the Indian Residential School system.”

Bigsby is aware of the urgency to increase the number of Aboriginal nurses across Canada and the need for culturally-safe, client and community-centred care. Donna Kurtz, who is Métis and an associate professor and Aboriginal liaison with UBC Okanagan’s school of nursing, explains that this approach is critical to addressing current and future health inequities and structural racism which Aboriginal communities experience.

“Increasing the supply of Indigenous nurses has been widely cited as a strategy for improving health experiences and services for Indigenous Peoples in Canada and, ultimately, improving their health status, especially in Indigenous communities where nurses make up a large proportion of the healthcare workforce,” says Kurtz.

President Ono’s Statement of Apology can be read online at: president.ubc.ca/statement-of-apology

For more information about the Truth and Reconciliation Commission of Canada, visit: www.trc.ca/websites/trcinstitution/index.php?p=905