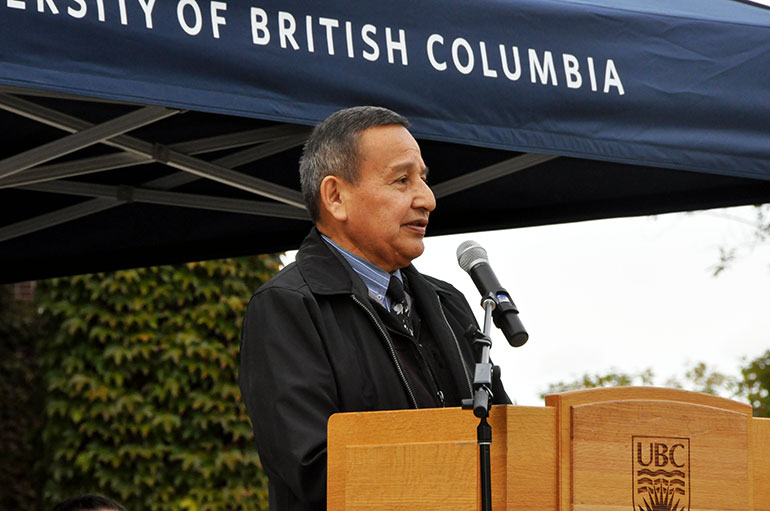 A new and permanent place has been given to the Syilx Okanagan Nation flag at UBC’s Okanagan campus.

UBC Deputy Vice-Chancellor and Principal Deborah Buszard says creating a home for the flag on this campus has been on her mind for some time. This spring, the university and the Okanagan Nation Alliance (ONA) began plans to install a fourth flagpole, giving the Syilx Okanagan Nation flag a place to fly continuously alongside the UBC, Province of BC and Canadian flags. 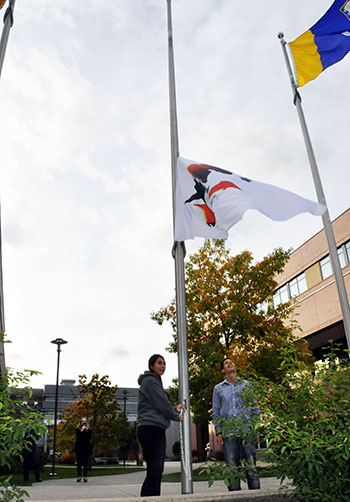 “UBC’s Okanagan campus has the rare distinction and privilege of being a post-secondary institution founded in partnership with local First Nations,” said Buszard. “By permanently raising the ONA flag we will ensure this symbol of the Syilx Okanagan people has an enduring presence on campus which reflects the significance of our partnership with the ONA. We are grateful to be welcomed in Syilx territory and proud to serve Indigenous peoples, including through committed support of student access and success.”

At yesterday’s event, a number of dignitaries spoke about the partnership with UBC and the ONA including UBC Chancellor Lindsay Gordon, Westbank First Nation Councillor Chris Derickson and Okanagan Indian Band Councillor Dan Wilson. Amber Cardenas along with Margaret Manuel sang the Okanagan song whilst the flag was raised by Syilx Okanagan students Briana Wilson and Cody Isaac.

“This act demonstrates direct action and leadership taken by UBC. Today is an honourable and historic day in raising our flag and emblem upon our beautiful lands and is truly a day for celebration,” said Stewart. “The ONA’s Chief’s Executive Council continue to encourage all post-secondary institutions and school districts within the territory to establish and strengthen working relationships with the nation for the purposes of increasing recognition of Syilx Okanagan culture, language, presence and territorial recognition.”

A similar flag-raising event is planned for UBC’s Vancouver campus later this year. Each campus sits on the traditional territory of its host nation: Musqueam in Vancouver and the Syilx Okanagan Nation in the Okanagan.

The flags formally signify UBC’s recognition of Indigenous peoples in whose lands the university resides, explained Chancellor Lindsay Gordon, and will add to a growing visible Indigenous presence on both campuses that includes bilingual signs providing alternate street names in hən̓q̓əmin̓əm̓ and nsyilxcn Indigenous languages.