Evaluating the effects of repetitive impacts 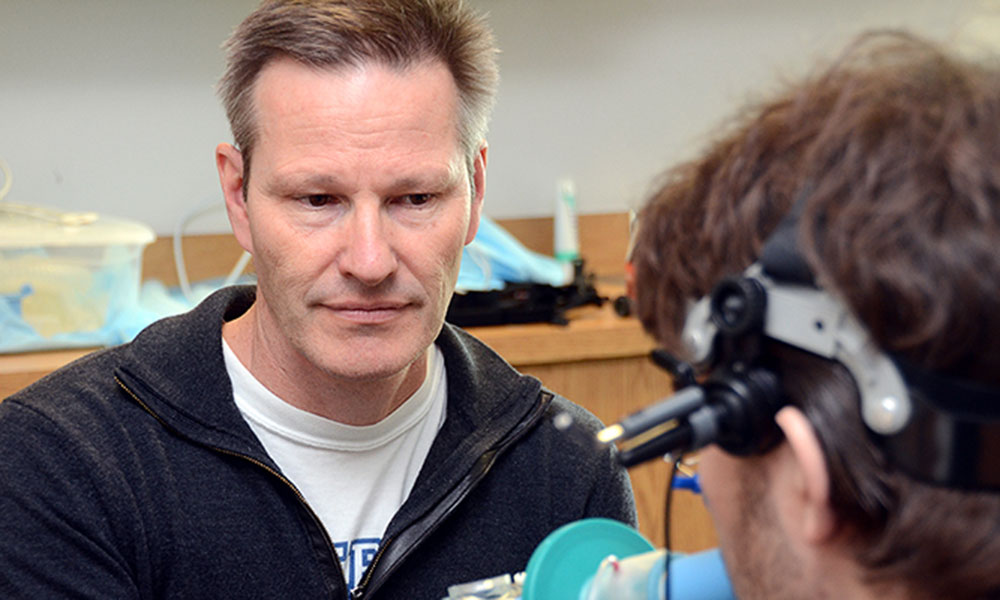 Role
Professor and Director, School of Health and Exercise Sciences

“Finding ways to improve the safety of contact sports is one key approach to mitigating the risks of concussion.”

YOU GOT YOUR BELL WRUNG. You’re dizzy and dazed, seeing stars. Well, shake it off and get back out there.

Until recently, this was how athletes and coaches in contact sports such as hockey and football reacted to a “stinger”—the kind of trauma that feels like a lightning bolt to the injured area. Sometimes, even more startling, this is also how victims of domestic violence responded.

The tide is turning however, as society recognizes that traumatic hits to the head can result in injury to the brain—a delicate, gelatinous organ of soft nervous tissue with 100 billion neurons, each neuron communicating with 10,000 other neurons.

When the brain is violently jostled in the cranial fluid, the injured party may experience such symptoms as headaches, nausea, fatigue and vertigo, personality changes, sleep disturbances, memory loss, epilepsy or lasting, progressive impairment—or utter catastrophe. 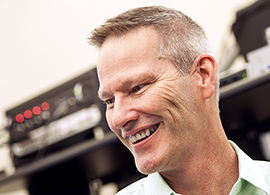 Enter, Paul van Donkelaar, a professor in UBC Okanagan’s School of Health and Exercise Sciences, who works with his research team on traumatic brain injury (TBI) due to sports concussion or intimate partner violence.

HEADING IN THE RIGHT DIRECTION?

“Sport-related concussion is becoming a major concern for athletes, parents, coaches and sport associations,” says van Donkelaar. “Finding ways to improve the safety of contact sports is one key approach to mitigating the risks.”

As such, van Donkelaar and his colleagues have embarked on evaluating the effects of repetitive impacts on players’ heads during contact and non-contact sports.

One of his recent research studies showed that using your head to alter the course of fast traveling, 80 km/hr soccer ball may have negative consequences. His findings are the first to show that certain biomarkers of nerve cell injury were elevated following multiple hits and these correlated with a higher number of concussion-like symptoms such as headaches, dizziness and confusion.

“We suggest that heading in soccer should not be overlooked as a potential way to inflict damage to nerve cells,” he adds.

‘SHREDDING’ THE BURDEN OF CONCUSSION

An all-star team of Canadian researchers, including van Donkelaar, is being brought together to focus their playbooks on the reduction of concussions and their consequences in youth sport across Canada. This initiative, led by University of Calgary researcher Carolyn Emery, is funded by the National Football League (NFL).

The Surveillance in High Schools to Reduce Concussions and Consequences of Concussions in Youth (SHRed) program will provide a national platform for concussion surveillance in high schools to evaluate new and sustainable solutions for concussion prevention. More than 6,000 high school students will be followed for three years in sports such ice hockey, rugby, football, lacrosse, wrestling, soccer, basketball, volleyball and cheerleading.

“Concussions are difficult to diagnose and treat,” says van Donkelaar. “Our research has shown that they can disrupt the flow of blood to the brain, altering the supply of oxygen, glucose and nutrients. This, in turn, can affect the brain’s ability to function, causing symptoms like headache, dizziness, and blurred vision.”

Led by a team of students—“they’re the boots on the ground doing all the work”—van Donkelaar’s lab is studying how to mitigate concussions. They are examining how the injury affects blood flow to the brain, and how that affects neurocognitive functions such as concentration, balance and attention span. Using state-of-the-art techniques including 3-D motion analysis, eye tracking and transcranial magnetic stimulation, the researchers also seek to answer how to reduce sport-related concussions.

“The main goals we have in our research is to diagnose and help athletes, coaches and parents in terms of tracking their recovery of function, and then ultimately making a better-informed and objective return-to-play or return-to-activity decision.” 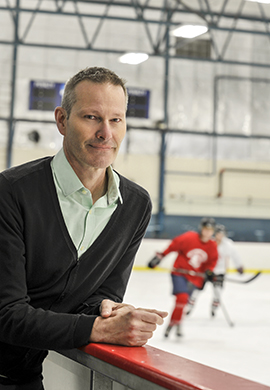 Until recently, the link between traumatic brain injury and intimate partner violence has been largely unexplored. To better understand the dynamic in this vulnerable population, van Donkelaar and his team have partnered with the Kelowna Women’s Shelter in a community-based research project.

“Unlike athletes who have suffered a sport-related concussion, survivors of intimate partner violence also, quite often, experience emotional difficulties such as post-traumatic stress disorder, depression and anxiety,” says van Donkelaar.

Once the data on the incidence of traumatic brain injury in this population is gathered, van Donkelaar hopes to improve the lives of the victims and their supporting network.