Items tucked away 25 years ago unveiled at ceremony

The past came alive at a special ceremony at UBC Okanagan yesterday.

A time capsule, complete with dozens of items tucked away 25 years ago by staff at Okanagan University College (OUC), was opened and its contents revealed. On Wednesday, Okanagan College President Jim Hamilton and UBC Okanagan’s Deputy Vice-Chancellor Deborah Buszard watched as the time capsule’s sealed lid was removed.

In 1993, the north campus of OUC, which is now UBC’s Okanagan campus, opened during a two-day weekend. During the opening celebrations, the capsule was sealed and then placed in the campus library. It sat undisturbed, with the only instructions being to open it in 2018.

“We at UBC owe tremendous thanks to the women and men of Okanagan University College for creating this campus, and to Okanagan College before that for establishing a post-secondary education system throughout the region,” said Buszard. “We continue to build on a very great thing. The collaborative relationship we have with Okanagan College is important to UBC Okanagan, and it is important for us to reflect on the foundation of our two institutions.”

Along with newspapers, ball caps, t-shirts, and a penny collection from 1993 all the way back to 1963 (the year OUC began as the BC Vocational School), the time capsule also contained a number of college recruiting video tapes and brochures, a Kelowna bus schedule, a calendar, key chains, mugs and two wrapped presents. One present is for the 2018 board chair and the second is for whomever the board chair will be in 2043—when a new time capsule will be opened.

Hamilton laughed about the changes in technology over the past decades and waved a number of VHS tapes and a CD as they were revealed. He too noted the unique history post-secondary education has in the Okanagan and the collaboration between OC and UBC Okanagan.

“It’s a relationship we value deeply, one built on the sharing of knowledge, ideas and expertise,” he said. “When I think about the ever expanding number of students and alumni of both institutions, and what they will accomplish in the decades to come, the combined potential of their accomplishments is too vast to even consider.

“But when we look back in another 25 years, those individuals and their work, along with all of you and your accomplishments will be the real testament to what has been accomplished on this campus and by our two remarkable institutions.”

A number of OC staff and faculty were on hand for the unveiling, including UBC alumnus and former OUC president Bill Bowering. Tiffany Thesen-Yee, daughter of the late Wayne Thesen who sealed the time capsule in 1993, also helped reveal its belongings.

“People like Wayne were builders of the campus and important contributors to life at OUC and at UBC Okanagan in our early days,” added Buszard. “His family established the Wayne Thesen Memorial Bursary to help visual arts students, because Wayne had a special regard for visual arts and was the person who handled hanging of all the artwork for the Visual Arts year-end exhibition each year.”

Both campuses will take turns displaying the contents of the time capsule until 2020—that marks the 15th anniversary of the 2005 “key ceremony”, an event that established the new Okanagan College and UBC Okanagan. At that time, the capsule will be re-dedicated and legacy items from OUC and UBC Okanagan will be added before it is again sealed for future generations. 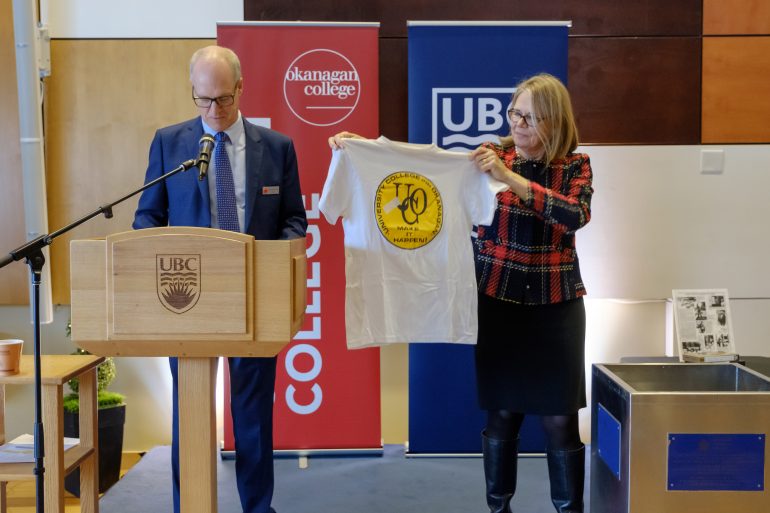