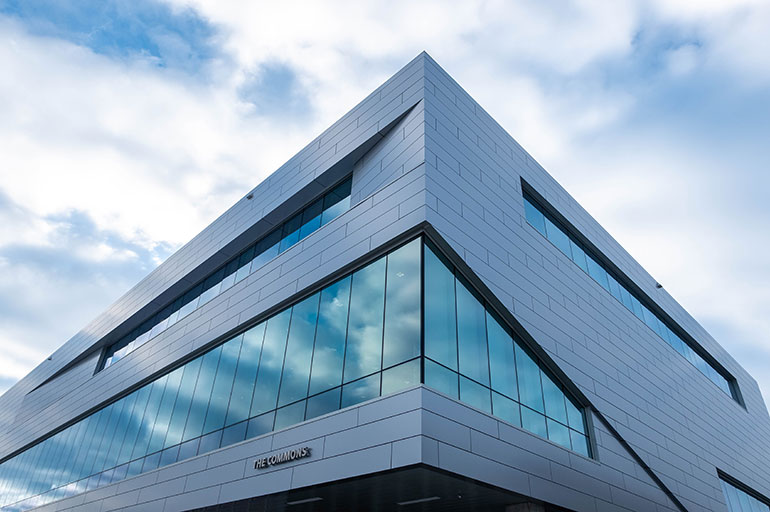 Students at University of British Columbia’s (UBC) Okanagan campus will be well prepared for a high-tech world studying in The Commons, a new multipurpose facility outfitted with modern classrooms, technology labs and collaborative study areas.

“The new Commons building will help students and researchers thrive and succeed. UBC students are our future leaders in many areas such as tech, science and engineering, and they’re helping us build the best B.C,” said Melanie Mark, Minister of Advanced Education, Skills and Training. “By investing in bright, modern facilities, students at UBC’s Okanagan campus now have the space they need that will help prepare them to be industry ready for in-demand 21st-century careers.”

The $35-million building was opened with an event attended by Stephen Fuhr, MP for Kelowna— Lake Country, on behalf of Navdeep Bains, federal Minister of Innovation, Science and Economic Development; Nicholas Simons, MLA for Powell River-Sunshine Coast, on behalf of Mark; Santa J. Ono, president, UBC; and university students, staff and faculty. As well, $5.8 million in environmental and sustainability upgrades across campus are now complete.

The classroom will be the largest on campus and enhance access to high-demand courses while supporting active learning. Accessibility was a key design element, with fully 20% of seating — roughly 90 locations — accessible to students using wheelchairs.

UBC Okanagan students played a special part in funding the new building, agreeing to a small annual levy, which contributed $9.8 million towards the construction costs of the centre.

“Modern learning spaces are key to helping students develop the skills they need for the jobs of today and tomorrow,” said Bains. “Our government’s investment in The Commons building will support our world-class scientists, engineers and technicians while laying down the groundwork for innovation and cutting-edge research.” Investments through the Post-Secondary Institutions Strategic Investment Fund were used to modernize facilities at Canadian universities and colleges, as well as improve the energy efficiency of these facilities and reduce their impact on the environment.

"Our government is proud to invest $2 billion for infrastructure improvement at post-secondary institutions across Canada. Modern learning spaces are key to helping students develop the skills they'll need for the jobs of today and tomorrow."

“Investing in students is investing in a positive future for all of us. The Commons at the University of British Columbia in the Okanagan provides students with a phenomenal teaching and learning facility. It will also benefit everyone through the cutting-edge research and highly trained graduates we’ll need to power our strong and innovative economy.”

“We are so proud that these new facilities will continue to help UBC Okanagan students achieve their dreams. The University of British Columbia Okanagan is an innovative institution of choice that delivers a world-leading education, and this marks an important moment in its history. This new facility is only possible thanks to the financial support of our partners in the federal and provincial governments, as well as the current and former students who contributed nearly $10 million to the project.”

“Students were the first donors to The Commons and have contributed $10 million to the project. We are very proud of this legacy, which we leave to future generations of students and to our UBC Okanagan campus. These new spaces open up much-needed study space and inspire collaboration. They support our ability to create world-class projects, right here at UBC Okanagan.”