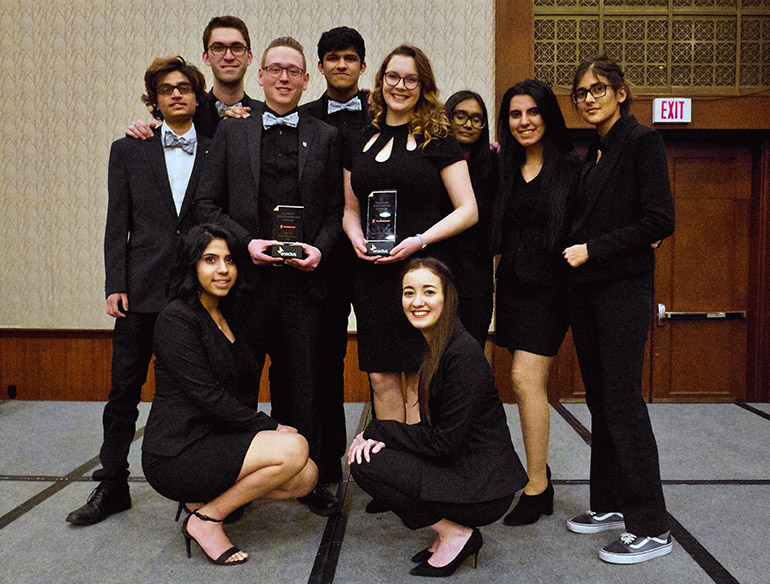 The team was second runner-up in the Scotiabank Youth Empowerment Challenge and received the Regional Champion award in the Scotiabank Environmental Challenge for the second year in a row. Now the Enactus UBC Okanagan team will continue on to the National Exposition alongside the league champions in the Central and Atlantic Expositions to compete for the national title in Vancouver, from May 7 to 9.

In Calgary, the team presented on the metrics and impact of their two projects — Inventathon and Roots — and introduced a new financial literacy program: Project Bond.

Inventathon is a 24-hour business incubator designed to empower youth at the UBC Okanagan campus and give students exposure to entrepreneurship. The Enactus UBC Okanagan team then works with the winners and sponsors from the community to implement and fund their ideas.

Project Roots is a food-saving initiative that not only diverts secondary-grade produce away from waste but also targets food insecure audiences. In partnership with Farm Bound food delivery service, the Enactus UBC Okanagan team launched Project Roots six months ago to promote healthier and more affordable dietary choices for UBC students. Project Roots offers a ‘U-box’ containing 12 to 30 pounds of secondary grade produce at 40 to 60 per cent below retail price. Project Roots also supports local farmers, as all funds raised are put back into the community as a new revenue stream for farmers.

Project Roots is growing on- and off-campus by introducing and running three Green Kitchen cooking classes for students, as well as through the launch of a distribution location at the Veda housing development on Academy Hill near campus.