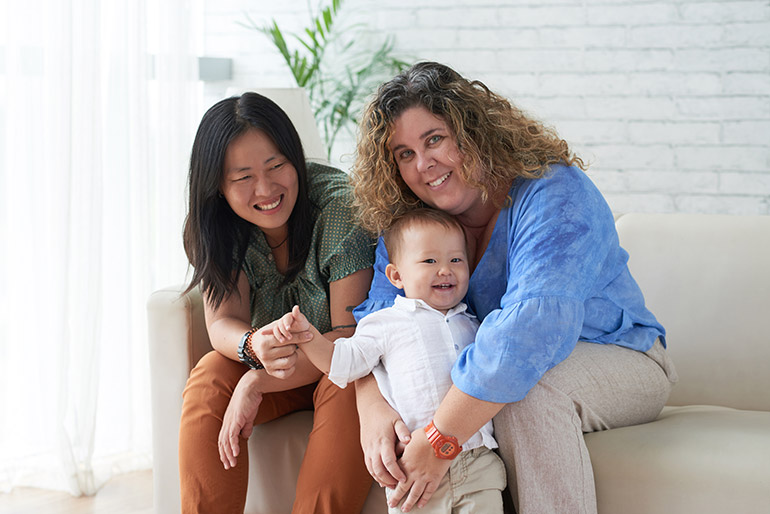 Screening tools do generally work but research has determined that the Transracial Adoptive Parenting Scale is not accurate enough to determine what type of support sexual minority parents might need once they adopt a child.

A better measure is needed for gay, lesbian and gender minority adoptive parents

A UBC researcher says a tool to assess potential adoptive parents does not meet the needs of lesbian, gay or gender minority adults.

TAPS, which has 29 items, is a measure of empathy and understanding on issues such as discrimination, prejudice and cultural competence and is traditionally used to evaluate the readiness of becoming a parent through transracial adoption. Depending on where potential adoptive parents land on the TAPS scale, practitioners can then provide support in specific areas.

While TAPS is a commonly-accepted measure in clinical practice, Dow-Fleisner’s research says it misses the mark when it comes to sexual minority adoptive parents, specifically lesbian and gay parents.

“These screening tools are meant to be able to assess the needs or areas where parents can use some support in terms of understanding what it means to adopt transracially, or perhaps a child with special needs or a child with a history of trauma,” she explains.

Screening tools do generally work, she says, but her research has determined that TAPS is not accurate enough to determine what type of support sexual minority parents might need once they adopt a child. Her research shows the majority of lesbian or gay couples, about 60 per cent, adopt cross-racially—where at least one parent is a different race than the child.

“As a scale, it’s not sensitive enough. It’s generally reliable, but we wanted to test how valid is it across certain groups,” she says. “It’s as if you were to weight a person with a scale that only measures tonnes. You will get an accurate weight, but not the most precise or useful weight.”

Having accurate screening tools matters, she says, since sexual minority parents are more likely to adopt a child from the child welfare system, and that child often comes with a variety of special needs.

“Our hope is for sufficient screening tools and continued research to help reduce discrimination against prospective sexual and gender minority parents looking to adopt,” says Wyman Battalen. In 2015 there were about 30,000 children in the Canadian child welfare system legally eligible for adoption. However, many of those children will age out of the system before they are adopted. Aging out, explains Dow-Fleisner, can lead to an increased risk for homelessness, substance use, poor academic performance and suicide.

“Yet we have parents who are ready, willing and able to adopt,” she adds. “The screening tools we currently use have lagged behind the people we are serving. We need to develop a tool that measures adequately across all groups of parents.”

“Sexual minority parents’ experiences in dealing with societal heteronormativity may lend itself to greater ease of entering a dialogue about race, discrimination, and cultural pride,” Dow-Fleisner suggests. “Yet, the screening tools we use have lagged behind the people we are serving and we need to develop a scale that is sensitive to the strengths and needs of sexual minority parents.”

The research was published recently in Journal of Evidence-Informed Social Work.