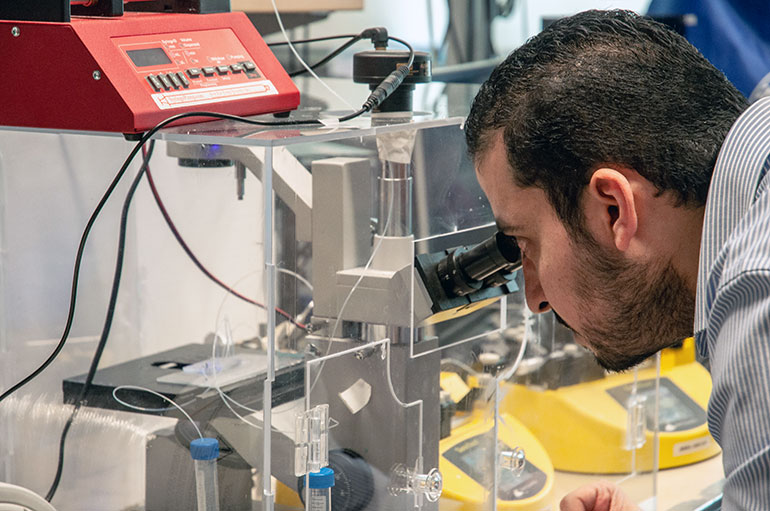 A simple injection that can help regrow damaged tissue has long been the dream of physicians and patients alike. A new study from researchers at UBC Okanagan takes a big step towards making that dream a reality with a device that makes encapsulating cells much faster, cheaper and more effective.

“The idea of injecting different kinds of tissue cells is not a new one,” says Keekyoung Kim, assistant professor of engineering at UBC Okanagan and study co-author. “It’s an enticing concept because by introducing cells into damaged tissue, we can supercharge the body’s own processes to regrow and repair an injury.”

Kim says everything from broken bones to torn ligaments could benefit from this kind of approach and suggests even whole organs could be repaired as the technology improves.

The problem, he says, is that cells on their own are delicate and tend not to survive when injected directly into the body.

“It turns out that to ensure cell survival, they need to be encased in a coating that protects them from physical damage and from the body’s own immune system,” says Mohamed Gamal, doctoral student in biomedical engineering and study lead author. “But it has been extremely difficult to do that kind of cell encapsulation, which has until now been done in a very costly, time consuming and wasteful process.”

Kim and Gamal have solved that problem by developing an automated encapsulation device that encases many cells in a microgel using a specialized blue laser and purifies them to produce a clean useable sample in just a few minutes. The advantage of their system is that over 85 per cent of the cells survive and the process can be easily scaled up.

In addition to developing a system that’s quick and efficient, Gamal says the equipment is made up of readily available and inexpensive components.

“Any lab doing this kind of work could set up a similar system anywhere from a few hundred to a couple of thousand dollars, which is pretty affordable for lab equipment,” says Gamal.

The team is already looking at the next step, which will be to embed different kinds of stem cells—cells that haven’t yet differentiated into specific tissue types—into the microgels alongside specialized proteins or hormones called growth factors. The idea would be to help the stem cells transform into the appropriate tissue type once they’re injected.

“I’m really excited to see where this technology goes next and what our encapsulated stem cells are capable of.”

The study was published in the journal Lab on a Chip with funding from the Natural Sciences and Engineering Research Council of Canada and the Canadian Foundation for Innovation.