Creating a link between science and application 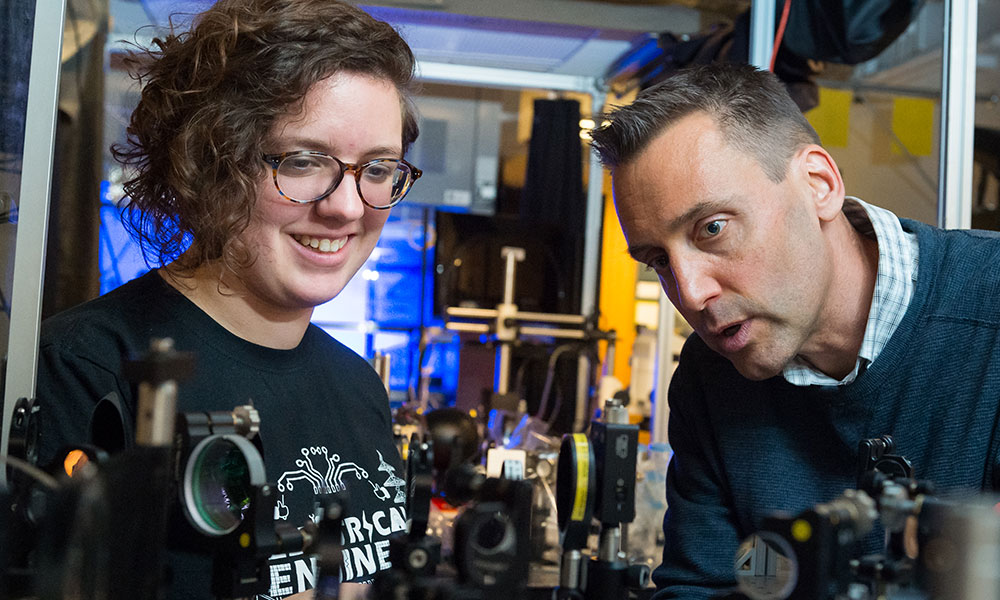 “When I teach I always try to put it in the context of how students are going to use it. When you do that, you see all those attentive eyeballs pointed at you at the front of the class.”

UNTIL RECENTLY, LIGHTSPEED WAS A TECHNOLOGY HARNESSED only by sci-fi spacecraft like the Starship Enterprise. Today, in UBC Okanagan’s Integrated Optics Lab (IOL), Professor Jonathan Holzman and his students are employing the speed of light to solve some very real electrical engineering issues.

Find out more about our BASc in Electrical Engineering

At the far end of his lab, Holzman presses a finger onto a long table covered in high-tech equipment.

“We have to keep this table floating on a cushion of air so vibrations don’t affect accuracy,” says Holzman, as the table emits a hissing sound and gently bobbles.

When working in femtoseconds — one millionth of one billionth of a second — stability is crucial, explains Holzman.

Technology using photons or light is taking over much of our electronics because of its ability to transfer data faster than electrons, he says.

THE SPEED OF TEACHING
Holzman is a 2018/19 recipient of a prestigious Killam Teaching Prize. It’s immediately clear why Holzman’s students love him. He explains complex theories with clear and practical examples in unshakably calm, methodical tones. 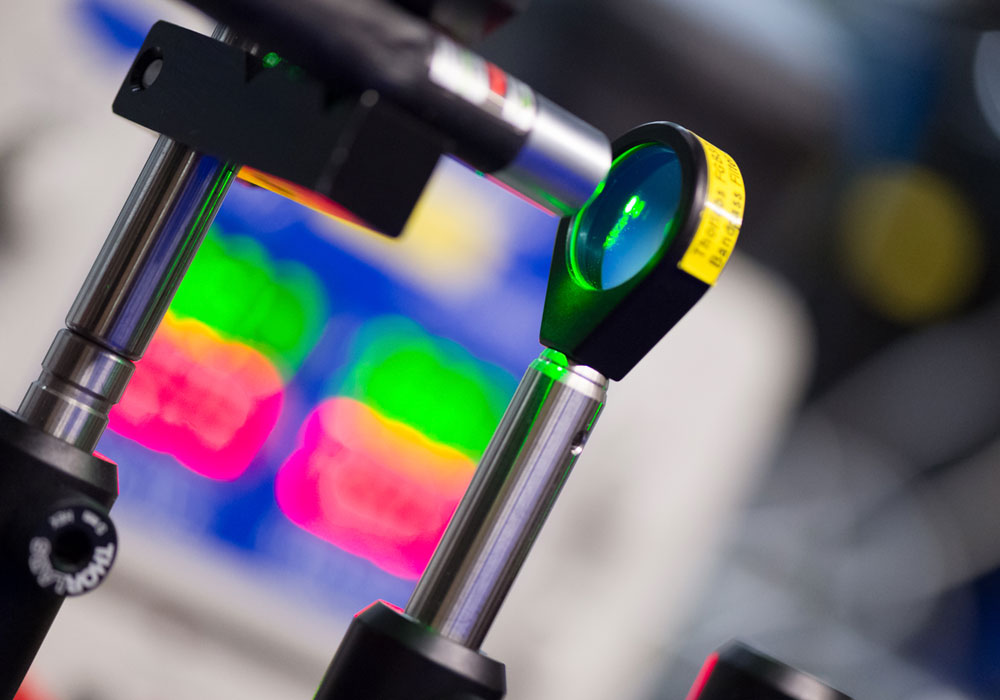 Continuing the lab tour, he motions to an adjacent table decorated with an array of equally confounding high-tech gear, including machines with tiny diodes of red and green light.

“Like Morse Code, I can turn a light on and off to relay information. But our eyes stop being able to see things at 30 frames a second. Here in the lab we are talking about light being turned off and on millions, even billions, of times per second,” says Holzman, the mind behind much of the design of the upper year electrical engineering curriculum.

As one of the first faculty members in the School of Engineering at UBCO and a program coordinator, Holzman worked collaboratively with industry to bridge their needs with the curriculum.

“When I teach I always try to put it in the context of how students are going to use it. When you do that, you see all those attentive eyeballs pointed at you at the front of the class,” says Holzman, who continuously endeavors to inspire students.

As well as helping students establish the Okanagan student chapter of the Institute of Electrical and Electronics Engineers (IEEE), in 2015, Holzman created the Stewards in Engineering Education (SEED) program, which allows high-school students to shadow university student researchers.

Holzman has been recognized for his teaching before. He received the 2016 Teaching Award of Excellence from the Association of Professional Engineers and Geoscientists of British Columbia and the 2017 Medal of Distinction in Engineering Education from Engineers Canada. The key to his teaching success, he says, is blurring the lines between the lecture hall and the laboratory.

“This concept of creating a link between science and its application is what developed into my overall philosophy of integrated teaching and research — so much so that the laboratory where I work is titled the Integrated Optics Lab,” says Holzman, noting the word integrated also references the integrated technology on electronic chips. Connecting the lab with the classroom experience, says Holzman, is critical to developing students who can solve problems.

“The greatest challenge tends to be in first year because you have students who have been told math is important for engineering but they can’t quite see why solving a quadratic equation will keep a bridge from falling down.”

LACK OF FOCUS TO LASER FOCUS
Perched on a lab stool in the Integrated Optics Lab, student Naomi Fredeen is close to completing her master’s degree in electrical engineering.

Fredeen says if it weren’t for Holzman and the curriculum he designed, she would never be sitting here.

“I had a rough time in the first year of my undergrad, moving out of my parent’s house and then learning how to study.”

After failing some courses in her first year, Fredeen wasn’t sure she would even graduate, let alone go on to a master’s. But then she took two courses designed by Holzman and things shifted. Fredeen completed Holzman’s third-year digital logic course and says she never looked back.

“I’ve always had a better time in Dr. Holzman’s courses. They were just very logically laid out. Important points are repeated and it’s easier to figure out what you should be focusing on,” says Fredeen, who stresses how Holzman’s ability to bring real-world applications into the classroom and the lab spurred her on. 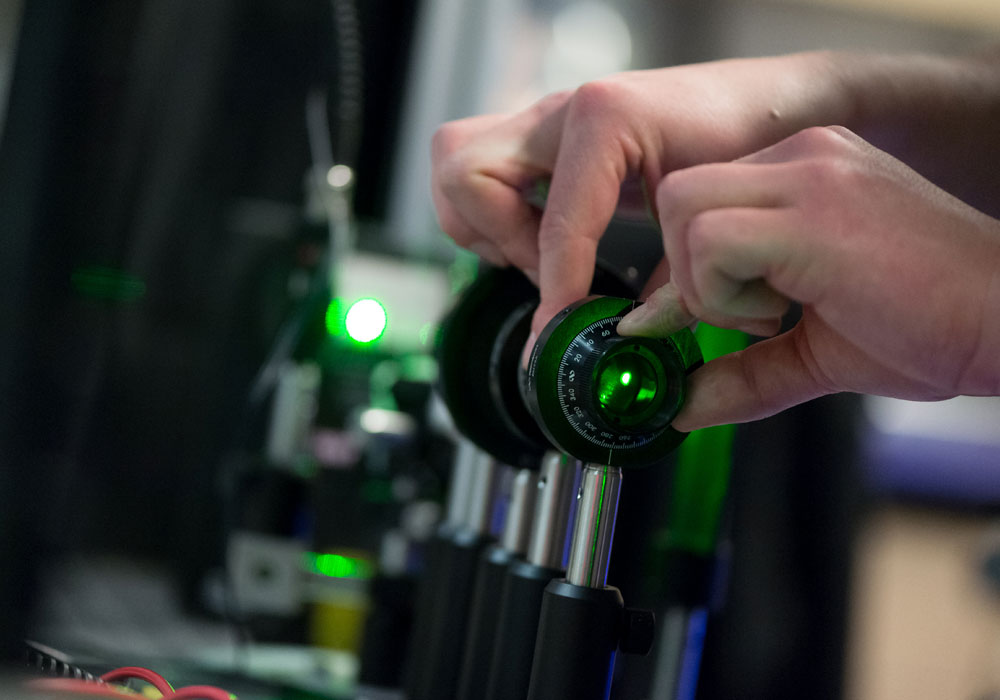 Fredeen’s master’s explores how emerging laser and optic technology can be used to tell the difference between healthy and cancerous cells.

As she returns to her work in the IOL, the quality of Fredeen’s focus speaks volumes.

“It’s all about engagement,” says Holzman, clearly pleased with her dedication.

“The students are seeing that these are relevant concepts and it’s important that they learn them so they can go out and use them.”

THE FAST FRONTIER
What becomes clear in discussion with Holzman is that he sees his students as much more than learners — they’re his future colleagues.

“We are pushing the envelope of modern technology and, as part of our role as an educational institution, we’re bringing students along in the process.”

In collaboration with the Swiss Federal Institute of Technology in Zurich, Holzman and his students are breaking long-standing records of data transfer speeds using optical technologies.

True pioneers in the frontier of the very fast, they are harnessing the speed of light in the classroom and the lab — ‘boldy going where no one has gone before.’ 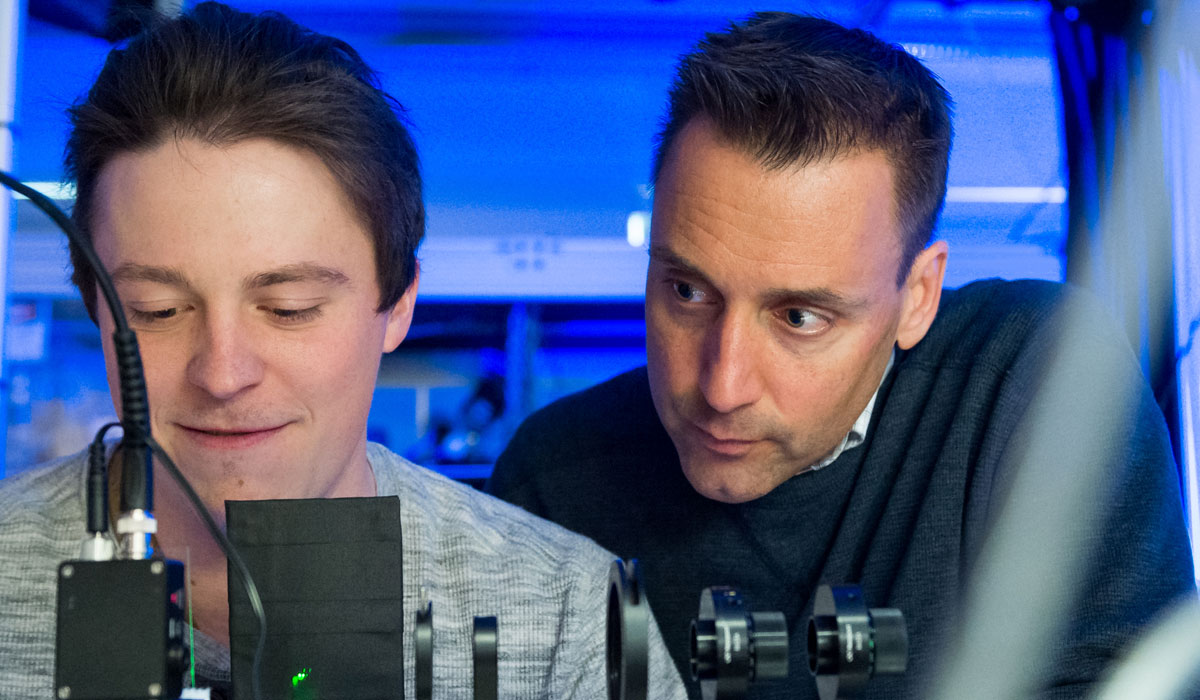