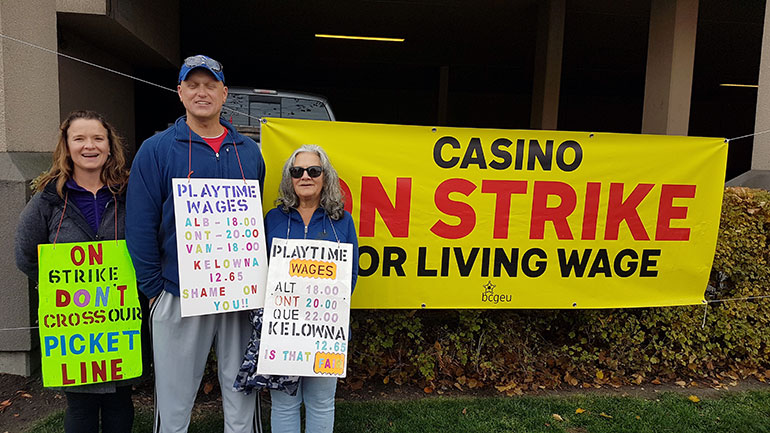 The Okanagan Valley has seen a number of groups, including casino workers, walk off the job in protest of wages and working conditions.

Labour resurgence and injustices at work topics of discussion

What: Envisioning Labour’s Future in the Okanagan
Who: Unionists and worker activists
When: Saturday, May 18, starting at 10:30 a.m.
Where: Okanagan Regional Library, 1380 Ellis Street, Kelowna, BC

The Okanagan Valley has seen its fair share of labour disputes over the past few years. A number of groups, including casino workers and bus drivers have walked off the job in protest of wages and working conditions.

Similar to other areas in Canada, labour in the Okanagan has been challenged by a declining post-war economy and the emergence of a post-industrial economy based on service, information technology and the health and wellness sectors.

The majority of these sectors can be difficult to organize, prompting labour groups to invent campaigns to evolve their organization strategies.

Envisioning Labour’s Future in the Okanagan is the first event to publically discuss labour and its relevance to the community in the absence of a strike or protest.

This open-dialogue event invites unionists, worker activists and the public to come together to discuss the recent resurgence of labour in the Okanagan, and how workers are organizing to challenge injustices at work.

The event will feature multiple guest speakers throughout the morning, including:

This is a free community event being hosted by UBCO’s History and Sociology Department, the North Okanagan Labour Council and the Okanagan Regional Library.

No advanced registration is required. To find out more, visit: www.eventbrite.ca/e/envisioning-labours-future-in-the-okanagan-tickets-61178983988